— Written By Seth Nagy and last updated by Tina Lovejoy

The Extension Center has received several phone calls about stink bugs being found inside the house. These creatures are becoming active again as the weather warms and they are moving from their wintering sites to the outside. I thought I would share the current information about the bugs, what research is being done, and what homeowners need to know.

The brown marmorated stink bug (BMSB, Halyomorpha halys) is an invasive pest that was accidentally introduced from Asia into Pennsylvania in the 1990s. Its first detection in North Carolina was in Forsyth County in 2009, and it has since spread rapidly throughout the 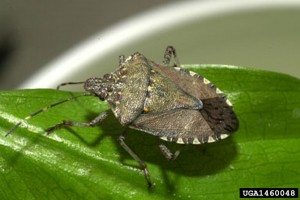 piedmont and mountain regions of the state. The bug was first detected in Caldwell County in 2012.

Brown marmorated stink bugs overwinter as adults in man-made structures, standing dead trees, and other sheltered places. In April and May, these adults leave the protected areas and move into nearby woods where they mate and lay eggs on suitable host plants. By June or July, the eggs hatch and 1st-generation BMSB nymphs and adults begin entering nearby agricultural fields, generally preferring fruits and vegetables early in the summer and moving to soybeans later in the season. Under ideal conditions (warm temperatures and favorable hosts), a second generation of adults may be produced. As days become shorter in early August, adult BMSB cease laying eggs. In September, adults begin to disperse to overwintering sites, including homes and other structures, and by early October, most individuals have entered their overwintering site. The month of September, when adults are aggregating on homes, is usually when invasions to new areas are first observed.

What’s being done about this new invasive pest?

NC State University is part of a collaboration of over 50 scientists in the eastern US working on the biology and management of BMSB. An excellent source for the latest developments is http://StopBMSB.org, which compiles information from all regions that have been affected by this exotic stink bug.

Identifying non-crop host plants: The BMSB has been observed on an enormous variety of plant species in both natural and managed landscapes, but it clearly prefers some species over others. By recording the number of individual BMSBs occurring on each species at certain location, we have developed a better understanding of what plants the BMSB requires to establish itself. The most favored hosts are Tree of heaven, Paulownia (princess-tree), Catalpa, Wild cherry, Black walnut, Wild grape, Black locust, Yellowwood, Buckeye, Sycamore, Maple, Dogwood, Wild blackberry, Boxelder, and Redbud trees.

Developing monitoring systems: As part of a coordinated study involving researchers from several eastern states and led by the United States Department of Agriculture – Agricultural Research Service (USDA-ARS), we have compared different trap types and pheromone lures in order to determine the most effective combinations for use in agricultural fields and other outdoor settings. The improved traps and lures will be used in conjunction with scouting and damage data to detect movement of BMSB into new habitats and to develop models that can be used to predict population biology and population densities in agricultural crops– a crucial component of Integrated Pest Management (IPM).

Discovering native predators and parasitoids: Stink bugs that are native to North America do not cause nearly the damage of BMSB because their populations are kept in check by a diversity of natural enemies. Studies are being conducted to determine the impact of native predators and parasites on BMSB populations in different habitats, including agricultural crops, woodlands and other non-managed landscapes. Over time, this research will help assess the impact of natural enemies on BMSB in different habitats and what can be done to enhance their activity in different settings. It is hoped that such natural enemies will become a significant tool in the reduction of BMSB populations as an alternative to conventional routine insecticide applications.

Overwintering habits: We know BMSB overwinter in houses and other structures, but we do not understand all of the cues that stimulate them to enter and leave those sites. BMSB “homes” are being used to monitor movement into and out of overwintering sites to help determine how temperature and day length affect the behavior of BMSB.

You can help by reporting. Since 2011, NC State University has been collecting information about BMSB occurrences through an online survey. Completing a survey helps researchers understand what is happening across the state with this invasive pest. The link to the online survey is http://harvest.cals.ncsu.edu/surveybuilder/form.cfm?testid=15017

How do I kill BMSB in my house? Generally, insecticide sprays are not effective due to the mobile nature of the stink bugs, the constant influx of new stink bugs from outside sources, and the difficulty of treating populations without contaminating living areas. In addition, leaving a large number of dead BMSB inside attics, walls, or crawl spaces can attract more unwanted pests, such as carpet beetles. Instead, the simplest, most reliable method is to drop captured individuals into a dish of soapy water to drown them, or to vacuum them and then dispose of the vacuum bag. In areas of high infestation, this is admittedly a time-consuming process.

Why do BMSB stink? All stink bugs are capable of emitting a foul-smelling chemical that they use as a defense mechanism when alarmed. The taste of the chemical also deters some birds and other animals from eating stink bugs. An undisturbed BMSB is not likely to stink, but the smell of a large number of agitated stink bugs can be intolerable.

We have always had a few stink bugs around – why are there suddenly so many? North Carolina has always had several species of native stink bugs, some of which appear quite similar to the brown marmorated stink bug. Native stink bug populations are kept in check by predators and parasites, but the brown marmorated is a recent, accidentally-introduced exotic pest that is not (yet) controlled by native predators and parasites.

How do I keep BMSB out of my house to begin with? Before large numbers of BMSB begin searching for overwintering sites in late August and September, seal all potential entry points with weatherstripping, caulk, or foam sealant. Check for gaps around windows and doors, place screening over attic ventilation louvers, and make sure there are no gaps or cracks around faucets and piping.

This article was adapted from research conducted by the Walgenbach Lab at NC State University..