Find this article at:
go.ncsu.edu/readext?304609
— Written By Amanda Taylor and last updated by Tina Lovejoy

Spring, and its warm weather, is officially here. With this warmth come insects. A particularly conspicuous group of insects that is showing up now are ground nesting bees, which raise many questions for homeowners.

Most people see the signs of ground nesting bees (also called mining or digger bees) before they see the insect. The first sign is usually aggregations of small mounds of soil with pencil-sized holes in the middle.

Ground nesting bees vary greatly in size and coloration between species; they can be metallic green or fuzzy like honeybees. 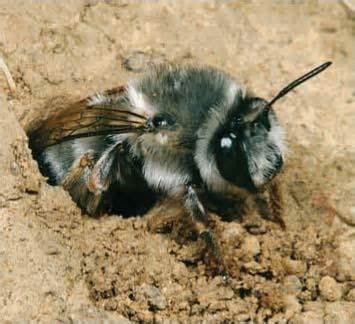 Adults may be seen flying low to the ground around the mounds. Most often these are male bees, which cannot sting.

Unlike most other bees and wasps, these solitary bees nest individually in holes in the ground. Because they nest alone and are not protecting a family, they are not aggressive.

Each hole belongs to one female. At night, females excavate burrows, which can be six inches deep. She collects pollen and nectar during the day and makes a ball in her burrow, on which she will eventually lay one egg.

These insects prefer to nest in areas that drain well and receive morning sun. Nesting is most common in bare ground and in areas where vegetation is sparse. 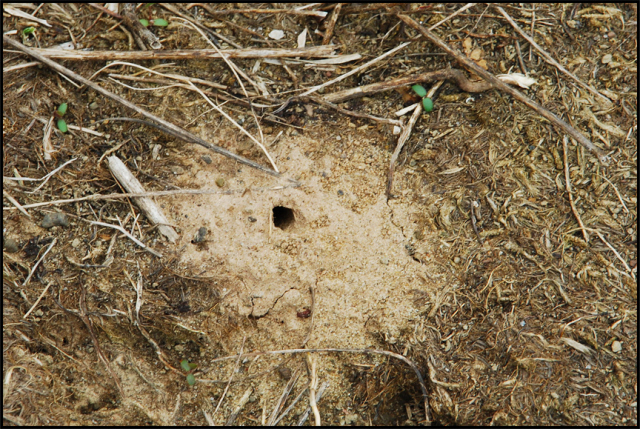 Chemical control of these bees is unwarranted, as they are valuable insects in our ecosystem, pollinating crops and wild plants. Although high populations can develop in one area, their nesting does not damage turf. In fact, burrowing is beneficial, because it aerates the soil.

The nesting period of ground nesting bees lasts anywhere from two to four weeks and is most common in March and April. Mowing can be continued as normal during nesting. The adult bees will overwinter in the burrow but will not return to the same burrow the following year.