Find this article at:
go.ncsu.edu/readext?308481
— Written By Seth Nagy and last updated by Tina Lovejoy

Fall webworms are noticeable in trees around Caldwell County. As their name implies, fall webworms create a web. The web provides the worms protection from predators and allows the worms to feed freely inside their web. 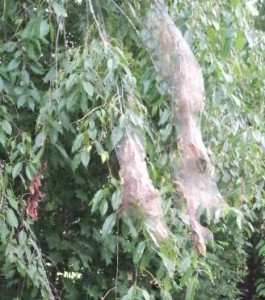 The web, besides keeping predators out, also retains the caterpillar’s frass inside the web. In addition to the web, another predatory adaptation is they respond in unison with a strange jerking motion when disturbed. To see this, just shake the branch and watch the worms dance.

Fall webworms are native insects to the United States. They feed on over 600 species of trees and shrubs. Unlike tent caterpillars, fall webworms begin their webs from the ends of the branches, not from the crotches of the trees. Also, tent caterpillars are active in the spring, not in the summer and fall.

The life cycle begins when the adult female moth lays up to 900 eggs on the underside of a leaf. These eggs hatch into tiny, hairy caterpillars that grow to about 1.5 inches long. In the fall, the caterpillars will drop to the ground and form a cocoon where they stay through the winter. The adult moths emerge in the spring where they mate and the cycle begins again.

Fall webworm feeding does not harm large shade trees. The webs are cosmetically unattractive, but since the damage occurs in the mid-late summer, the trees have time to store energy. However, small trees infested with several web masses may become entirely defoliated. This can weaken younger trees.

If fall webworms are a problem in the landscape, just take a stick or pole and break up the web. This will allow birds, wasps, and hornets to feed on the webworms. However, the fall webworm’s natural enemies are tiny predatory wasps. These tiny wasps are only about 1/16 of an inch in length. They sting the webworms and lay their egg inside. The wasp larva develops inside the caterpillar using it as artificial womb. The wasp will emerge as an adult, killing the webworm caterpillar.

Although fall webworms are native to the United States, they were accidentally introduced to Yugoslavia in the 1940s. Since then, they have invaded most of Europe and spread to China, Korea, and Japan. This insect is a major pest in these introduced countries. In Europe, the fall webworm is more destructive than the European gypsy moth caterpillar is in the United States.

The gypsy moth was intentionally introduced to the United States in 1869. The European gypsy moths were introduced with the hopes of interbreeding with silk worms to develop a silk industry in the United States. The interbreeding never occurred, but the moths have spread from Massachusetts to the border of North Carolina and Virginia. Traps are set in North Carolina to try to slow the spread of these damaging insects.