Find this article at:
go.ncsu.edu/readext?310189
— Written By Amanda Taylor

You may have never heard of cucurbit downy mildew. But you’ve probably seen it if you grow melons, cucumbers, or pumpkins in your garden. 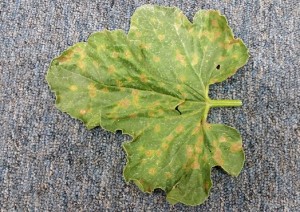 Cucurbit downy mildew (CDM for short) is a disease that devastates plants in the cucurbit family (melons, pumpkins, cucumbers for example). It is by far the most serious disease of cucurbits. Some folks call the disease “wildfire” because of its speed and severity.

The pathogen cannot survive our harsh winters unless it is in a greenhouse. It usually arrives in North Carolina in June, as spores are blown north from southern Florida, where it overwinters. The first sample of it was brought to our office this year on June 22.

It can be tough to tell CDM from other diseases that affect cucurbits. Brown angular spots on leaves and rapid death are the identifiable characteristics on cucumbers. On melons, the spots might be brown or black. In humid weather, dark fluffy spores can be seen on the underside of the leaf spots. Leaves will sometimes curl upwards.

CDM, like other downy mildews, enjoys cool (60 degrees is ideal), overcast, wet weather. The week of unusually cool temperatures at the end of July set the stage for the death of many plants due to CDM.

Unfortunately, there’s no guarantee that your cucurbit plants won’t become infected. To reduce the likelihood of your garden plants getting the disease, don’t water the leaves of plants; instead water the soil around the plant.

Planting time is another strategy. Since the pathogen arrives in June, planting early will ensure you get a harvest before plants become infected.

Although CDM is technically not a fungus, it acts like one, and fungicides are used to treat the disease. Protective fungicide applications of chlorothalonil or mancozeb have limited efficacy.