When most people think of the word “blight,” 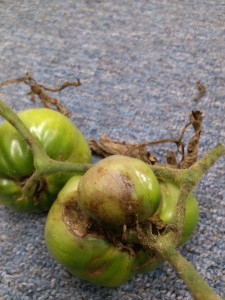 they think of a disease that spreads rapidly. When growing tomatoes in the south, there are two blights you should be familiar with: early blight, which I’ve written about before, and late blight.

By far the most famous of the two is late blight. Late blight is caused by the same pathogen that contributed to the Irish potato famine of the 1840s. In the South, it is more of a problem for tomatoes than potatoes (they are cousins).

Late blight, contrary to its name, does not show up very late in the growing season. The first incidence is usually reported in June or July depending on the weather.

You’ll know you have late blight when you see dark spots on leaves that look greasy. The spots eventually consume the entire leaf and it dies. Spots tend to start at the bottom of the plant but don’t always. White cottony growth may be visible on the underside of the leaf. Plants may collapse seemingly overnight.

Like the cucurbit downy mildew that I wrote about a couple weeks ago, this disease is also air-borne. That is, spores do not overwinter in our area but are blown into the region from the warmer south. That is why we don’t see it early in the season.

Often gardeners ask if the infected produce is safe to eat. Plant diseases do not affect humans, so the produce is not contaminated by the blight. You may, however, notice that the quality is reduced and that fruit rot quickly after being harvested.

Late blight is considered a community disease. That is, when the pathogen arrives in an area, it takes everyone to manage it. So what do you do if you think you have late blight?

First, make sure late blight is the problem. Samples can be brought to the Caldwell Extension office for diagnosis. Other less serious diseases don’t require as drastic measures as late blight.

If it is late blight, then you’ll need to rip the plants up and throw them away. Leaving late blight-infected plants in the garden is a good way to spread the disease to your neighbor’s garden.

If you think you have late blight in your garden, contact the Caldwell Extension office at 828.757.1290. For more information on late blight, visit http://go.ncsu.edu/lateblight.