Find this article at:
go.ncsu.edu/readext?317520
— Written By Seth Nagy and last updated by Tina Lovejoy

In North Carolina, efforts began in 1916 to address a shortage of the fertilizer potash due to the world war. Up to that year, according to Knowledge is Power, “most of the potash used in the United States had been imported from Germany at a cost to the farmer of $40 to $50 per ton. The war had cut off the supply and any available potash was priced at $450 to $500 per ton, which made it prohibitive for use in agriculture.” Tobacco growers, especially, were urged to save wood ashes and tobacco stems to use on the crop in place of potash.

Then when the United States entered the war in 1917, the need for expanded food and feed production became critical. Extension’s first director, Dr. Benjamin Kilgore, wrote that “farmers of the country began to call on the established agricultural institutions for advice and assistance in the production of … food and feedstuffs. In no State of the Union was this truer than in the State of North Carolina; and in no other State was the response more satisfactory than in North Carolina.”

All-out production was the order of the day, and that included food production for home use. Homemakers were called on to save sugar, fats, wheat and meat, and girls and boys who took part in Extension’s youth programs learned to more efficiently produce and conserve food. 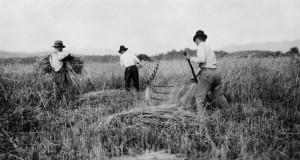 This 1919 photo from the NCSU Libraries Digital Program depicts wheat farm operations in Buncombe County. Wheat is being cut by cradle and bound by hand.

Despite a labor shortage, record crops were produced. Some old crops were given new emphasis, and some new ones were promoted. With sugar shortages, Extension encouraged farmers to grow sweet sorghum for molasses and syrup. By 1920, North Carolina ranked third nationally in this endeavor, with farmers producing 3.5 million gallons. In 1917 and 1918, home demonstration agents helped women, boys and girls can almost 15 million containers of food and helped families start war gardens.

In 1915, an Elizabeth City company became the first in the United States to process American-grown soybeans. In 1917, as the boll weevil threatened the cotton crop and as Southern oil mills began contracting with farmers, Extension began working with farmers to expand soybean acreage. Commonly, the soybeans were intercropped with cotton or used in a three-year rotation with cotton along with peanuts, soybeans, sweet potatoes or other plants that would replenish the soil with nitrogen and minerals. Today, soybeans rank as our state’s third most important cash crop.

In helping meet the nation’s wartime needs, the U.S. Department of Agriculture reported that the Extension system:

If Cooperative Extension can help you with any of your challenges, please call us at 757.1290.