Find this article at:
go.ncsu.edu/readext?318639
— Written By Seth Nagy and last updated by Tina Lovejoy

Last Sunday morning we were greeted with cool temperatures. I was asked the difference between frost and freeze warnings. Many use the term frost and freezing interchangeably, but they are really different.

A frost occurs when ice crystals form on the surface of plants. This damages cold-sensitive plants. Of course, temperatures have to be 32°F for frost to form. However, with clear skies and calm winds, frost can form when observed temperatures are 33° to 36°F. This happens because cooler, more dense air settles near the ground. Official weather stations make observations at 2 meters above the ground. This height difference is enough that the ground can be 32°F, but the station thermometer may indicate a higher temperature. It is for this reason the National Weather Service issues Frost Advisories when temperatures are forecasted to be between 33° to 36°F degrees.

A freeze is more damaging than a frost. A freeze occurs when water in a plant’s cells freeze. Freezing damages the plant cells when ice crystals act like thousands of microscopic needles piercing the cell membrane. This makes the plant cells leaky, and cell death occurs. For a freeze to occur, temperatures observed at a weather station must be 32°F or less. This indicates the temperature at plant-level is likely 32°F or less.

Besides being asked about frost and freeze warnings, I was asked a question about pasture weed control. The question is “Our cattle pasture is being taken over by dog fennel and briars. 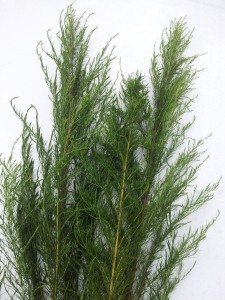 Dog fennel is a problematic weed in pastures and waste areas. It can be identified by its fine leaves, woody stem, and strong fennel type odor

We’ve bush hogged them down but they keep coming back year after year. Can we apply a herbicide to control the weeds?”

Right now cold temperatures will keep the weeds from being a problem in pastures. However, for long term control I recommend a one-two punch to get your pasture back. Basically, we don’t just want to kill the weeds; we also want the pasture grass to thrive.

To knock out both brambles and dog fennel, use triclopyr (Remedy Ultra). This is the Cadillac herbicide treatment for this situation. The problem is this treatment also comes with a  Cadillac price tag. This option could create some herbicide carryover issues that should be considered. (http://mountainhort.ces.ncsu.edu/programs/ncorganic/special-pubs/herbicide_carryover.pdf)

I would apply either herbicide treatment in May once the dog fennel and blackberries have put on some new growth. The plants/weeds need enough leaf area to be able to take in the herbicide.

The other punch is getting the grass growing. We’ll do this by taking a soil test to make sure your pasture does not have fertility issues that need to be corrected with lime and/or fertilizer. A soil test is a free service offered by the NC Department of Agriculture when submitted May through November. When soil samples are submitted in the peak season, between December and March, there is a $4.00 fee per sample.

The other part of the equation is creating a strong sod. This can be accomplished by over-seeding pastures that are thin and fertilizing at the right time for fescue. The ideal times to fertilize tall fescue is February and/or in September/October.

The other issue to always be considered is grazing management. If the pasture is over grazed, weeds will always be an issue and animal performance and profitability will suffer.