Find this article at:
go.ncsu.edu/readext?322192
— Written By Darlene Berry and last updated by Tina Lovejoy

For three local youth a journey that began with a March registration is coming to fruition. Their registration reserved the first day of summer for poult pick up at North Carolina State University’s Animal and Poultry Teaching Unit. These youth had a summer that was full of care and preparation as the poults transitioned from a heat lamp to a backyard coop. This week they will travel with their hen back to Raleigh for the Youth Market Turkey Show at the North Carolina State Fair. All participants in the show will be evaluated on the overall weight of their turkeys, the muscling in the breast and legs, and the overall care of their bird.

Moranna Faith Deal, daughter of Wesley and Lisa Deal,  is a first time participant in this program. 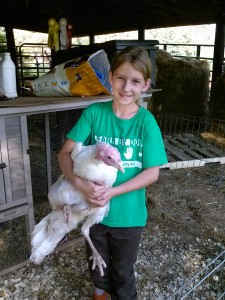 Raising poultry is not new to her, but turkeys were a new species. During an after school interview, she shared her experience with me and talked in detail about the differences she observed between raising chickens and turkeys. First of all, “turkeys get a lot bigger.” She has also observed the color changes in the caruncle, the reddish-pink fleshy growth on the head and upper neck of the turkey. She has fed her young turkey hen, poultry growth starter in hopes of ensuring it reaches the 10 pound expectation for entry this weekend. She has also been working on handling her turkey in preparation for the show. She will have a full weekend at the fair as she shows both her turkey and sheep.

Also familiar with livestock showing is Alex Cassavaugh, son of Wayne and Revonda Cassavaugh. He is accomplished within the Junior Heifer show arena and recently began competing in 4-H presentations and public speaking about the Black Angus breed. A trip to his backyard demonstrated his delight in poultry.

Quite fond of his backyard flock, Alex brings me through his after school chore routine. He shares his experience processing chickens with his grandfather, John Cassavaugh at Shade Tree Farm. He thinks the family will enjoy one of the hens during an upcoming holiday meal, but also shares that he is not ready for that right now. He is focused on handling his turkey and choosing which hen to bring to the show.

He finds them heavier and harder to handle than his chickens. He is fascinated with the turkey’s feathers, the long contour ones on the wings and the underneath feathers that lack a true vane structure along the shaft (see picture insert.)

He is looking forward to joining his fellow peers at the state fair where combined they will be showing turkeys, heifers, and sheep.

These youth are making connections with their community and state. They are having an experience that connects them with a  base of knowledge and an experience they will recall across their lifetime. They may be exploring a hobby or a career path. Why is this important? According to the North Carolina Department of Agriculture, North Carolina’s agricultural industry, including food, fiber and forestry, contributes $78 billion to the state’s economy. It accounts for more than 17 percent of the state’s income, and employs 16 percent of the work force. North Carolina is one of the most diversified agriculture states in the nation. The state’s 52,200 farmers grow over 80 different commodities, utilizing 8.4 million of the state’s 31 million acres to furnish consumers a dependable and affordable supply of food and fiber. North Carolina produces more tobacco and sweet potatoes than any other state and ranks second in Christmas tree cash receipts and the production of hogs and turkeys. The state ranks seventh nationally in farm profits with a net farm income of over $3.3 billion. Net income per farm in the state is over $63,000. This is just another reminder about why it is important for youth to be making connections with agriculture.

If you are interested in exploring this opportunity, a complete description is available at http://poultry4hyouth.ces.ncsu.edu/youth-market-turkey-show/. If you have questions and would like to partner with other youth and families from Caldwell County in this project, please call Darlene Berry or Lisa Deal at the 4-H office, 828.757.1257. Both Moranna and Alex are quick to recommend this experience to their peers. I am hopeful that in 2015, the Caldwell County 4-H staff will spend the first day of summer with youth picking up turkey poults at NCSU.