Find this article at:
go.ncsu.edu/readext?325966
— Written By Tina Lovejoy

For me, and most Americans, an oven roasted turkey is the iconic symbol of a Thanksgiving feast. Alexander Hamilton, one of the founding fathers, said, “No citizen of the U.S. shall refrain from turkey on Thanksgiving Day.” To this day, turkey is still part of any proper Thanksgiving celebration.

As North Carolinians, we can feel good about this focus on turkey. As of the last official annual count in 2012, NC Farmers raised 36 million turkeys. Although 36 million is down from the peak production of 62 million turkeys in 1992, currently, only Minnesota raises more turkeys than us. However, as an industry, agriculture and agribusiness, is a growing part of our economy. When it comes to food, fiber, and forestry, this accounts for almost one-fifth of the state’s income and employees. More than 17 percent, or $77 billion, of the $440 billion gross state product is contributed by agriculture and agribusiness. This also employees 642,000 of the state’s 3.8 million employees in the workforce.

Although NC Farmers work hard to raise quality birds, it still takes knowledge and effort to turn a raw turkey into a Thanksgiving feast. I applaud each and every full and part-time domestic engineer who undertakes this traditional task of roasting a turkey for friends and family. All the work it takes to cook a turkey should be appreciated by anyone lucky enough to be invited to the feast.

However, it is my experience that the person who cooks the turkey is typically not the same person that carves the turkey. Carving the turkey is usually reserved for the head of the household or an honored guest. Too often there is little written guidance for these honored individuals on how to best tackle the task. If you are lucky enough to be the individual carving the turkey, then you should make sure you are prepared for the task.

The first step when carving meat is preparation. This involves making sure your tools are up for the task. The tools consist of a knife and a meat fork. I like a knife that has a blade 8 to 10 inches long and a nice sturdy 6 inch meat fork. Together these instruments are called a carving set. Well before the bird comes out of the oven, inspect the tools. I like to make sure the knife is tuned up and ready go for the main event. This essentially involves making sure the knife is razor sharp.

There is an art to knife sharpening that is worth mastering. If you do not have adequate tools to sharpen your carving knife, make a trip to the local hardware store. Take time to read the directions on how use your sharpening equipment. Additionally, if your knife is made of low carbon metal, a honing steel can be used to make the knife edge even sharper once an edge has been put on the blade with a stone or other sharpening implement.

Now that your tools are ready for the task, let’s review proper technique. Stand up. Do not attempt to carve sitting down. Position the cooked bird so the front is facing you and the legs are pointing away from you. Have all the dinner plates stacked so there will be a place to set the sliced turkey. Now you are ready to carve the bird. Start by removing a one leg. (Remove the bird’s left leg if you are right-handed.) Remove both the drumstick and thigh. It may take a little coaxing to remove the entire leg. Focus your effort at separating the leg at the joint where it attaches to the body of the bird.

Now that the leg is out of the way, the breast should be fully exposed. Just set the leg to the side. At the bottom of the breast, just above the wing, make a deep horizontal cut. Start this cut from where the leg was removed to the front of the breast. Making this horizontal cut is essential. Another carving trick is to remove the wishbone. This upside down V-shaped bone should be apparent under the skin. The wishbone only attaches at two ends of the “V” near the wings. Getting the wishbone out of the way makes carving the breast easier. The wishbone can also be removed before cooking.

Once the breast meat has been served from the first side, move to the other side of the bird and repeat. Remove the leg and repeat the deep horizontal cut just above the wing. However, before I begin carving the breast, I like to rotate the turkey platter 180 degrees. This keeps me carving from the same side and I find it more comfortable. 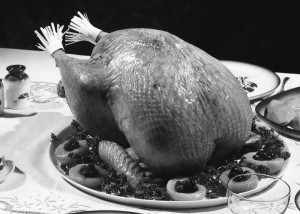 An iconic image of a roast turkey from the archives at the D.H. Hill Library at NC State University. Properly carving a turkey adds to any Thanksgiving feast.

Support the slices of breast meat with the face of the fork. This will eliminate the possibility for the knife blade cutting into the tines of the fork.

Taking time to properly prepare the carving set, and developing a plan of attack for the turkey, is a way of honoring those who prepared the meal. It is also a way to honor the entire family. This Thanksgiving I hope you are able to take time and count your blessings. I believe we all have a lot to be thankful for.