Find this article at:
go.ncsu.edu/readext?329692
— Written By Seth Nagy and last updated by Tina Lovejoy

Several questions have come into the Caldwell Extension Center this week. I’ve expanded on three questions I thought would be of interest.

Wasps built a nest in a milk jug next to my dog lot. When can I dispose of the nest without fear of getting stung?

After the first frost of the season, wasp and hornet nests can all be safely removed. These nests will not be reused the next year. Unlike honeybees, only the queens of wasps and hornets survive the winter.

This spring the fertilized queens will begin to build a nest all by themselves. Once they construct enough of a nest, they will lay eggs. 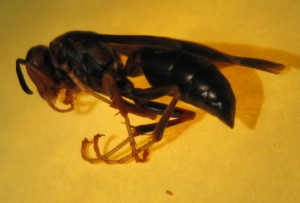 Paper wasps have all abandoned their nests. The fertilized queens will over winter and start new nests in the spring.

The queen will tend the young when they first emerge. The colony will continue to build and grow. The wasp and hornet colony peaks in July and August. During September, the colony prepares for winter by producing queens and drones. The queens are fertilized before they seek shelter for the winter. In the spring, the cycle starts over and the queen starts building the colony by herself.

What is a sugar plum?

The term sugar plum dates back to the 1600’s but was popularized in the early 1800’s by Clement C. Moore’s poem “A Visit from St. Nicholas” which is better known as “Twas the Night Before Christmas”. The now famous line “Visions of sugar plums danced in their heads,” is part of our culture whose original meaning is somewhat lost. This term, sugar plum, is actually referring to candy. Specifically, the term “plum” once refer to any of a variety of dried fruit (figs, cherries, apricots, dates, or prunes). To make a sugar plum, these dried fruits were finely chopped and combined with chopped nuts, honey, and spices (anise seed, fennel seed, caraway seeds, cinnamon, cloves, or cardamom). This mixture would then be rolled in sugar to create a sugar plum.

Can gasoline containing ethanol be safely used in 2-cycle engines, or should 100% petroleum gas be used?

The ultimate answer to this question is contact the engine manufacturer and follow their recommendation. However, I think a little additional information about this topic is helpful to understand the issues.

Most gas pumps in Caldwell County indicate the fuel may contain up to 10% ethanol. Ethanol is an alcohol produced when yeast ferments sugar. Yeast have been converting sugar to alcohol since before recorded time. In recent years, there has been an effort to increase ethanol production through legislation. Ethanol is considered a renewable energy resource.

One reason to add ethanol to gasoline is to help the gasoline burn more completely. In this role, ethanol is acting as an oxygenate. Oxygenates are additives that reduce carbon monoxide and soot created during combustion. Prior to ethanol, methyl tert-butyl ether, better known by its initials MTBE, was the most popular oxygenate in gasoline. One reason to switch away from MTBE is its negative environmental effects.

The majority of two-stroke cycle engine manufacturers have information in printed technical manuals and on their websites that discusses the use of ethanol fuels. Most approve the use of fuels with up to 10% ethanol blend. There are a number of ethanol fuel treatments that can be mixed into fuels, as well as suppliers of 100% gasoline, available to run in engines without causing harm. Otherwise, these suggestions may be helpful; buy fuel at the engine manufacturer’s recommended octane level, keep fuel fresh (less than two months old), do not keep fuel in an engine’s fuel tank for long periods, monitor fuel for changes in color, odor, separation, and viscosity (for example, check to see if the fuel is getting thick and syrupy).