Find this article at:
go.ncsu.edu/readext?367405
— Written By Amanda Taylor

When people think of stinging insects, they think of bees and wasps, not caterpillars. However, there are several species of caterpillars that sting. They usually show up at this time of year and are most often found feeding on the leaves of trees and shrubs. 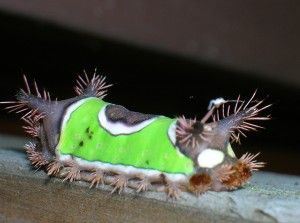 Bees and wasps aren’t the only insects that sting. Some caterpillars, like the saddleback caterpillar pictured here, have spines or barbs that can be painful. If you spot these insects in your garden or landscape, leave them alone. They won’t be around for long. (Photo: Wikimedia Commons)

The barbs or spines of stinging caterpillars are like quills with small sacks of poison attached to them. When it encounters what it believes to be a predator, the quills are inserted and the poison release through the quill. Usually, the response is mild itching or pain.

Most people believe that bright coloring serves as a warning that a creature is poisonous. While that is sometimes the case, it is not a hard and fast rule. This is evident in the wide variation in coloring of caterpillars which sting. Being able to recognize a few of the most common stinging caterpillars can prevent painful encounters.

Saddleback caterpillars are brightly colored creatures that are mostly brown with a green marking that resembles a saddle on its back. They are most commonly found on oak, cherry, and plum trees, but we’ve had reports recently of them on hibiscus and grapevines.

Hag moth caterpillars are also light brown, but have nine pairs of appendages (which sting), making them very distinctive. They resemble a small, dried leaf and are usually found feeding on the lower surface of leaves.

Stings from these caterpillars are relatively rare and usually caused by accidentally rubbing up against them while doing yard work. If you notice one of these critters on your body or clothing, don’t hit it with your hand. Instead, take a stick and flick it off.

The stinging hairs of these caterpillars can lodge not only in skin but also in clothing. Adhesive tape can be useful in removing hairs that are stuck in the skin. If you do get stung, wash with soap and water.

If you have questions about your garden or landscape, visit https://caldwell.ces.ncsu.edu or call the Caldwell Extension office at 828-757-1290.