What You Need to Know About Avian Influenza

Find this article at:
go.ncsu.edu/readext?375413
— Written By Seth Nagy and last updated by Tina Lovejoy

The current threat is from a disease called Highly Pathogenic Avian Influenza (HPAI). The disease first appeared in Korea last winter – January, 2014. The disease jumped from Korea to British Columbia then into Pacific Northwest of the United States. To date, 15 States have been affected. There have been a total of 223 farms affected, 19 have been backyard flocks and 204 have been commercial flocks. A total of 48 million birds have been euthanized to prevent the spread of this poultry disease. Although this disease has affected other states, it has not been in North Carolina. Also, currently there are no active cases of this disease in the United States. The last confirmed case was in Iowa on July 14.

Influenza in poultry falls into two groups: low pathogenic avian influenza (LPAI), or highly pathogenic avian influenza (HPAI). Similar to influenza symptoms in people, birds infected with LPAI usually experience only mild signs if any, including respiratory signs such as conjunctivitis and nasal discharge, ruffled feathers or a drop in egg production. Unlike LPAI, the first indication of HPAI in poultry is sudden death, often without signs of illness. In the last 40 years, there have been introductions of LPAI across the country, all of which have been successfully eliminated.

There is no cure for highly pathogenic avian influenza and it is 100% fatal to chickens and turkeys. There is not a public health concern with this disease. Currently it only affects poultry, not people. However, influenza viruses are known to mutate and public health officials are monitoring this situation.

The only course of action once birds become infected is to euthanize them. This is done by Veterinarians with the Department of Agriculture. A plan is in place for Caldwell County. If birds should need to be euthanized in Caldwell County, the North Carolina Department of Agriculture has been working with Caldwell Emergency Management so this can happen quickly and efficiently. Also, since this is a foreign animal disease, Congress has authorized poultry owners to be compensated for euthanized birds.

The NC Department of Agriculture has taken steps for preventing this disease from spreading if it enters the State. 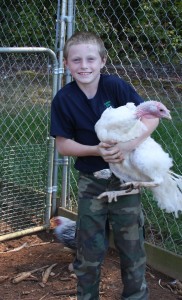 The 2015 4-H Youth Market Turkey show is canceled because of highly pathogenic avian influenza. The NC State Veterinarian canceled all poultry shows, cage bird shows, and public live birds sales as a precaution because of the disease threat. Alex Cassavaugh and other 4-H youth competed in the market turkey show last year.

North Carolina, as well as 13 other states, have canceled live bird shows and sales due to the threat of highly pathogenic avian influenza. No poultry shows, cage bird shows, or public sales of live birds can take place from August 15 to January 15, 2016, by order of the NC State Veterinarian. Locally this affects the poultry show at the Caldwell County Fair, the 4-H Youth Turkey Show, and 4-H Embryology with the Caldwell County Schools.

The most likely way this disease will enter North Carolina is from migrating waterfowl. North Carolina is in the Atlantic migratory flyway. Highly pathogenic avian influenza is not fatal in ducks. The ducks can be infected with HPAI and not show signs of the disease. However, as they migrate, they shed and spread the disease through their droppings. The NC Wildlife Commision has been sampling waterfowl for the disease.

The NC Department of Agriculture is requiring all poultry owners, regardless of the number of birds, to register with NCFarmID (http://www.ncagr.gov/ncfarmid). This will facilitate officials in alerting poultry owners about an outbreak, especially owners in close proximity to a positive farm. Anyone already part of the National Poultry Improvement Plan is exempt from this requirement.

Information gathered through registration will be used solely for animal health purposes and is confidential pursuant to N.C. General Statute §106-24.1. This critical data will provide animal health officials with necessary contact information in case of an animal health concern, and help identify animals and premises that may have been affected.

Highly pathogenic avian influenza is not in North Carolina. Hopefully it will not hit this fall with the migrations. The greatest risk is in December and January when migratory birds will be moving through the state.

Help protect backyard poultry and commercial flocks by registering with NCFarmID (http://www.ncagr.gov/ncfarmid). If you have questions about avian influenza call the Caldwell Extension Center at 828-757-1290 or visit the NC Department of Agriculture HPAI webpage at (http://www.ncagr.gov/avianflu).