Find this article at:
go.ncsu.edu/readext?373832
— Written By Amanda Taylor

If you’re not growing vegetables this fall, take some time now to build your garden soil for next year’s garden. One of the easiest ways to build soil is to grow a cover crop. 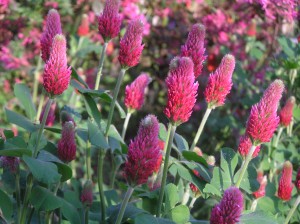 Growing a cover crop in your garden over the winter is a great way to build soil and reduce erosion. Legumes, like crimson clover (pictured here), are good at returning usable Nitrogen back to the soil, so that its available for next year’s garden. (Photo: Wikimedia Commons)

Cover crops are plants that are put back into the soil, not harvested. There are many benefits to using cover crops, including weed suppression, conserving soil moisture, and reducing soil erosion. As cover crops break down, they release nutrients and add organic matter into the soil.

There are several different types of cover crops, including clover, vetch, mustard, and rye. Which one you choose depends on what you’re trying to accomplish. Legumes are good for adding Nitrogen, whereas grains and grasses work well for weed suppression. Mustard and rapeseed can reduce soil-borne diseases.

Legumes, like clover and vetch, increase the amount of Nitrogen in the soil that plants can use. Growing legumes as a cover crop can reduce the amount of fertilizer that needs to be applied to a garden the following season. Crimson clover, Austrian pea, and hairy vetch are the most common legume cover crops.

Grains and grasses include ryegrass, wheat, and barley. These crops suppress weeds when they are mowed down and left on the soil surface (not tilled in). Vegetable seeds are then sowed into the debris in the spring.

Mustard and rapeseed have bio-fumigant properties and can suppress some diseases when tilled into the soil. Research has shown that certain varieties also reduce plant-damaging nematode populations.

Grains are often mixed with legumes at a rate of 3 parts grain to 2 parts legume. A popular combination to plant in the fall is clover and rye at a rate of 0.5 and 0.75 and lb per 1000 ft2, respectively.

In our area, September is a good time to sow seeds of cover crops. Legumes are typically sowed earlier in this window, whereas grasses and mustard are sown later.

There are two ways to handle winter cover crops when it’s time to plant the spring garden. They can be used as a “green manure” and tilled into the soil when still living and green. The other option is to mow, weed eat, or use an herbicide to kill the cover crop about four weeks prior to planting the vegetable garden.

Instead of leaving your garden soil bare this winter, consider sowing a cover crop. Next year’s garden will thank you.

If you have questions about your garden or landscape, visit caldwell.ces.ncsu.edu or call the Caldwell Extension office at 828-757-1290.