Find this article at:
go.ncsu.edu/readext?382967
— Written By Amanda Taylor

Healthy plants are less susceptible to environmental stresses, like excessive heat and drought, as well as insects and diseases. One of the easiest ways to encourage healthy plants in the landscape is to mulch them. 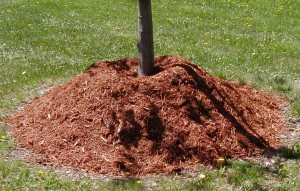 When mulching in the landscape, it is possible to have too much of a good thing. The excessive amount of mulch around this tree can cause the tree to decline. Avoid these “mulch volcanoes” by maintaining a 3 to 4″ layer of mulch and keeping it pulled away from the base of the tree. Photo: Cornell University

There are many benefits of mulching, including fewer weeds and less erosion, but the most important advantages to mulching in our area is more moderated soil temperatures and conserved soil moisture. Mulch can also decrease the incidence of soil borne diseases by preventing soil-borne pathogens from splashing onto leaves when it rains. Mulching around trees is important to prevent damage to trunks by mowers and weed eaters. Mulching tomatoes helps to reduce blossom end rot.

There are two types of mulches – organic mulch (made from material that was once living) and inorganic mulch. The most common types of organic mulch are pine bark mulch, hardwood mulch, and pine needles. Inorganic mulches include lava rocks, pebbles, plastic, and landscape fabric.

Organic mulches are preferred over inorganic mulches, because they break down and release nutrients back to the soil, which plants can then take up. They can also improve soil structure by adding organic matter. Because organic mulches break down, they need to be replenished periodically (usually about once a year).

Inorganic mulches do not break down so they don’t need to be replenished, but they also do not contribute any organic matter or nutrients to the soil. If you’ve ever had to replant an area that was mulched with lava rock or pebbles, then you know how much of a pain it is to remove the rock.

Although mulching can be an easy and inexpensive component of growing healthy plants, often trees and shrubs are mulched incorrectly, which can damage plants more than it helps them.

Trees and shrubs in the landscape should be mulched with a 3” to 4” deep layer of organic mulch, with the mulch pulled at least a couple of inches away from the base of the plant. A tree’s root system extends to an area wider than its drip line (an imaginary line drawn straight down from a tree’s canopy to the ground), so mulch as large of an area as possible beneath the tree.

There are a couple of common mistakes I see often. One mistake is creating “mulch volcanoes,” where several inches of mulch are piled against the trunk of a tree. It is believed that this method of mulching promotes trunk decay and encourages shallow roots at the expense of deep root development. Trees that are not rooted deeply are more likely to blow over during a storm. They are also less likely to live through a drought, since they can’t access water deep in the ground.

Mulching is an easy way to make plants healthier. As winter approaches, check your beds to make sure there is an adequate layer of mulch to insulate plant roots.

If you have a gardening or landscape question, call the Caldwell County Cooperative Extension Service at 828-757-1290.