Find this article at:
go.ncsu.edu/readext?417109
— Written By Tina Lovejoy

What would cause these dead places in this Bradford pear?

This is fire blight. This disease typically affects apple, crabapple, and pear trees. 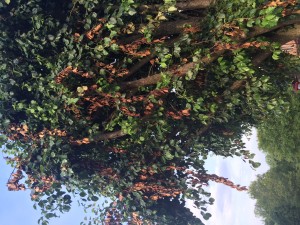 Fire blight is a bacterial disease. Pruning is the only cure once plants become infected.

The symptoms of fire blight first appear in the spring when blossoms become infected. Blossoms will shrivel and turn brown to black. Twigs and leaves become wilted and take on the appearance of a shepherd’s crook. During humid or rainy weather, blighted tissues may exude a milky-like, sticky liquid or ooze containing the bacteria.

Pruning is the only control. Prune 12 inches past the diseased area. Disinfect pruners after each cut with alcohol or Lysol. Some information suggested using bleach to disinfect pruners. Although bleach will work as a disinfectant, it will also rust bare metal on contact.

A cultural approach is the best way to prevent fire blight. Begin by selecting fire blight plant resistant varieties. Although no varieties are immune to fire blight, some are much more susceptible than others. Also, fire blight typically infects young, tender, growth. For this reason, do not fertilize trees early in the spring. Wait until the blooms have dropped before applying fertilizer.

What are these bugs on my squash?

These are squash bugs (Anasa tristis) and they are a major pest insect of all cucurbits. They feed using piercing needle like mouthparts. Rather than eat the leaves of the plant they actually suck sap from the plant. Their feeding results in plant wilt and in some cases plant death. Young plants are especially susceptible to being killed by squash bugs.

Squash bug eggs and larvae have many natural enemies, but not the adult bugs. Adult squash bugs are large and have a bad taste. The squash bug is actually a type of stink bug. For these reasons there are few natural predators of adult squash bugs. In test plots in Kentucky, predation by ground beetles reduced squash bugs on yellow crookneck squash and increased squash yields. Straw type mulch can provide cover for ground beetles and may help control squash bugs. Mulches also serve other purposes such as weed control, water conservation, and soil protection.

If squash bugs are not controlled by natural predators, products such as “Captain Jack’s Deadbug Brew” with the active ingredient spinosad or “Eight Insect Control Yard & Garden” with the active ingredient permethrin are both very effective. The permethrin product will provide better control if there are adults bugs. Also hand picking or hand “squishing” the egg masses are very effective in small gardens for control

When are Irish potatoes ready to harvest?

Potatoes typically take 100 to 120 days to mature. Harvest potatoes after most of the vines have died. A spade fork with flat tines is a good harvesting tool. Handle potatoes gently during harvest. Protect the potatoes from sunlight once harvested. Leave the tubers exposed to the sun just long enough for the soil to dry and fall off (usually about one to two hours).

Potatoes for use in early summer (“new potatoes”) may be dug before the vines die. Dig early potatoes when tubers are large enough to eat. Typically this is after the potatoes have bloomed. Harvest potatoes for storage two weeks after the vines die down. Fall potatoes are best for winter storage. Potatoes can be stored in a cool (40 to 50 ºF), moist (90 percent relative humidity) cellar for six to eight months. Sprouting becomes a problem when stored at higher temperatures.

For answers to your other agricultural questions, call the Caldwell County Extension Center at 828-757-1290, or visit us online anytime at https://caldwell.ces.ncsu.edu.

Looking for our email lists?

We have a list of all of our e-mail newsletter offerings.