Find this article at:
go.ncsu.edu/readext?434996
— Written By Seth Nagy and last updated by Tina Lovejoy

Predicting the weather is an inexact science. Today, scientist use computer models to make long term weather forecast predictions. However, not so long ago – in the 1950s –  Dr. C. H. Curran, curator of the American Museum of Natural History in New York, collected and observed woolly worms over an eight-year period. He noted the apparent link between their coloration and the local winter weather. This popularized the woolly worm weather predicting folklore.

The woolly worm is sometimes also called a woollybear caterpillar. This worm – or caterpillar – becomes a adult moth after it pupates. The moth is a type tiger moth known as the isabella moth. It is a tan medium-sized moth with a wingspan of about two inches. The woolly worm’s scientific name is Pyrrharctia isabella. J. E. Smith named this moth in 1797 with the species epithet of isabella. The name Isabella was likely chosen as the species name because the word means a buff-brown color, which is descriptive of the moth.

Woolly worm caterpillars are not picky about their diet. They will feed on a large variety of plants and weeds. They are opportunistic feeders eating whatever is available. People that have reared woolly worms have had success feeding them carrots, spinach, and a variety of weeds. They will eat most any type of plant.

For folklore-based forecasters, the predictive power of the woolly worm is said to stem from its brown-and-black colored bands. The legend says that the woolly worm’s 13 body segments can be linked with the 13 weeks of winter. Black bands are supposedly signs of cold, snowy weather, while brown bands are said to indicate milder conditions.

Of course, Banner Elk, NC has an annual Woolly Worm Festival. The outcome of this festival is an official winter weather prediction. The official woolly worm is selected based on speed, and this year the winning worm was Hans Solo. He was entered into the contest by brothers Reyn and Hickson Beekman from Boone. As we all know, Hans Solo’s mostly brown body suggests a milder winter. A more careful analysis of its body segments shows that it will snow the first few weeks of January.

Roy Krege, a long-time festival volunteer, said that winning worms have been correct 84.5 percent of the time. This claim of accuracy may be a little inflated. Staff at the State Climate Office of North Carolina believe the accuracy is closer to 40 and 50%. However, we all know that weather professionals are not right all the time either.

All joking aside, there may be a connection between the weather and the woolly worm’s colors. 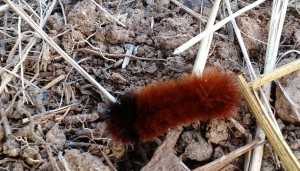 As they grow larger, woolly worms molt, or shed their skin. With each successive molt, more brown bands may appear, so these bands may be a good indicator of age, or essentially when the caterpillar started growing. If the previous winter was harsh or long-lasting, a woolly worm might be younger and darker. So the colored bands may be telling us about the previous year rather than the one to come.