— Written By Eli Snyder and last updated by Tina Lovejoy

In late summer, we may think of cicadas, sometimes called locusts, as a background noise as night settles in. Those late summer sounds are created by annual cicadas that complete their life cycle each year in our area. However, there are also periodical cicadas belonging to the genus Magicicada that emerge in different areas and have life cycles of either 13 or 17 years. There are several broods of each that emerge on different years. Each brood is concentrated in different areas across the country, and some have larger ranges than others. The adults that we see have black bodies, red eyes, and orange wing veins. This year in Caldwell County, we expect the Brood VI periodical cicada to emerge, which was last seen in the area in 2000.

The 17-year periodical cicadas will emerge as nymphs in April or May, after having spent several years underground as juveniles, where they get nutrition by sucking sap through plant roots. The nymphs will emerge following a rainfall event, when soil temperatures at an 8” depth are 64 degrees or above. These cicadas come from eggs that were laid 17 years ago. Once emerged, the nymphs will molt and transform into their adult stage, leaving behind a bronze colored exoskeleton on trees or other surfaces.

The adults will focus on mating, and will do little feeding on trees or foliage. Males will call females to mate with a distinctive mating call. After about a week of mating, females lay their eggs in the limbs of woody plants and trees. Once the females have laid their eggs, the adults die. To lay their eggs, females create a V-shaped incision in woody limbs or twigs and insert their eggs into the cut. The eggs hatch after six or seven weeks and the newly hatched nymphs drop to the ground and enter the soil, only to emerge in another 17 years.

The greatest damage done by these cicadas occurs during the egg-laying process. 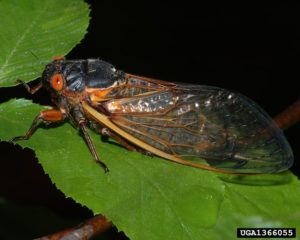 Susan Ellis, www.bugwood.org
Photo caption: The Brood VI periodical cicada is expected to emerge in this area in April or May. They last emerged in 2000.

Females have a knife-like ovipositor- an organ through which a female lays its eggs- that allows them to split open twigs to lay eggs. Females deposit 400- 600 eggs at a time. By doing so, they split or cause flagging in the wood, which can damage a limb, cause die-back, or cause a limb to break off. Minor splits will heal but heavily damaged limbs may need to be pruned out.

While some say that dogwoods may be a preferred species for egg laying, there is no research showing plant preference among Magicicada in part because their mating cycle occurs so infrequently. Conifers are not typically affected. There is also little research on the efficacy of various insecticides or other methods for controlling Magicicada. Homeowners concerned about special trees, young trees, or thin-barked woody plants should consider wrapping limbs in cheesecloth, bird netting, or row cover to prevent cicadas from laying eggs in the bark. Broad-spectrum insecticides such as carbaryl have not been researched in cicada control and are known to cause flares of other pests such as spider mites. Disturbing a field, through tilling the ground, or by other means, is one way to reduce nymph populations once they have returned to the ground.

This brood is centered in the North Carolina foothills, northwest South Carolina, and northeast Georgia. In North Carolina, the emergence is expected to be concentrated in Burke, Caldwell, Henderson, McDowell, Polk, and Wilkes Counties. Over the generations the range for this brood has diminished. Cicada emergence can also have an effect on other wildlife. Moles have been observed to be a greater problem in the year before an emergence, as they feed on nymphs. Wild turkeys, grackles and crows, other birds, and fish all feed on the adults. Tree growth may decline the year before an emergence, because there is greater root feeding by the cicada nymphs. For more information on Brood VI and Magicicada, visit http://magicicada.org. Please contact Caldwell Cooperative Extension at 828-757-1290 with further questions about gardening or managing for periodical cicadas.