Fall Questions at the Extension Center- Q&A With Eli Snyder

Find this article at:
go.ncsu.edu/readext?492407
— Written By Eli Snyder and last updated by Tina Lovejoy

This week, I will share answers to a number of timely questions have come into the Extension Center. As a reminder, fall is a great time to take soil samples. Sometimes we need to add lime to the soil to raise soil pH. Lime takes a relatively long time to react with soil and change the pH, so adding it in fall will give more time for that reaction to happen ahead of the next growing season. Soil test kits are available at our office (120 Hospital Ave NE, Lenoir, NC 28645) and soil tests are free through November. In December, the price of a soil test goes up to $4. For information on how to take a good soil sample, refer to the information in your soil test kit or consult one of the agents at the Caldwell Extension Center.

Question: What is this white fuzzy stuff on my shrub and what can I do to get rid of them? 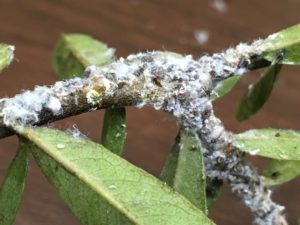 Some of the other woolly aphids also have multiple hosts and may be found feeding on elm, apple, pear, hawthorn, serviceberry, and other trees and shrubs. Woolly aphids are covered in waxy filaments, giving them a “woolly” appearance. While insecticidal soaps and oils can be used to control true aphids, the waxy filaments on woolly aphids provide them with some protection.

Woolly aphids cause mostly cosmetic damage to established trees and shrubs, and as such, control is often not needed. However, in high populations, they can cause severe damage to young plants. They feed on leaves, buds, twigs, bark, and even roots. They have a needle-like mouthpart, and they inject saliva into the plant to pre-digest the sap that they then suck out. They can cause leaves to curl or become distorted. This curling can also protect woolly aphids from insecticide applications. The curled leaves will fall when deciduous trees or shrubs lose their leaves, and new healthy leaves will grow back the following season. Woolly other aphids excrete a sweet “honeydew”, which can coat parts of the plant or even fall to objects below the infested plant. A black fungus called “sooty mold” may grow on the honeydew. Sooty mold is not necessarily harmful but it can cause an unsightly appearance and be a nuisance on vehicles or property.

Natural predators of woolly aphids and other aphids, such as lacewings, parasitic wasps, and lady beetles, may keep populations low and prevent significant damage to the plant. If aphids populations are high on a young plant, consider treating with a systemic insecticide. In areas where there are alders, avoid establishing silver maples so that these host trees are not in close proximity. Avoid planting serviceberry or elm close to one another as the woolly elm aphid spends time on both of these species throughout their cycle. Contact the N.C. Cooperative Extension –Caldwell County Center (828-757-1290).

Q: Are apples waxed and if so, why? Is this wax safe to eat?

A: Yes, many commercially produced apples have a microscopic coating of edible wax. Waxing of certain fruit and vegetables has been a common practice since 1924. 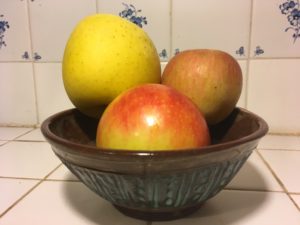 Wax is added to keep moisture in and extend shelf-life.

The moment a fruit or vegetable is harvested, it begins to lose moisture. While some fruits and vegetables have a natural wax, this can be reduced during post-harvest washing. As it loses moisture, quality declines and the product can become unmarketable. Wax is added to keep moisture in and extend shelf-life. Waxes also help stop mold growth, and they protect the fruit or vegetable from damage, disease, and bruising. Some products that may be waxed include: avocados, melons, turnips, bell peppers, apples, citrus, peaches, parsnips, squash, cucumbers, sweet potatoes, pumpkins, eggplant, and tomatoes.

Waxes can be made from beeswax, shellac, vegetable products, or petroleum, but they must be approved for food use by the US Department of Agriculture (USDA). While the wax is safe to eat, any waxed product should be scrubbed with warm water to remove dirt or contaminants. Some of the wax may come off in the scrubbing process. On average, the wax coating consists of only one or two drops of wax per item.