Find this article at:
go.ncsu.edu/readext?557792
— Written By Seth Nagy and last updated by Tina Lovejoy

I’m not exactly sure when fall will get here, but I know it will arrive eventually. With fall, or more specifically, with first frost, there is an increased risk of livestock poisoning.

Some plants become poisonous with the stress of frost. Johnson grass, sudangrass, and forage sorghum are all grasses that become dangerous following frost. 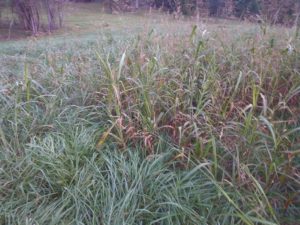 Be careful of grazing johnson grass, sudangrass, and sorghum when there is a threat of frost. Even small pockets of johnson grass can be a problem.

Cyanide is a problem because it stops the transportation of oxygen within the animal’s body. Normally, red blood cells transport oxygen from the lungs to the heart and the rest of the body. Red blood cells can do this because of a big molecule called hemoglobin. Hemoglobin is able to release oxygen where it is needed in the body. Cyanide binds permanently to the hemoglobin. It stops red blood cells from being able to distribute oxygen within the body. Animals die from prussic acid poisoning within a few minutes. 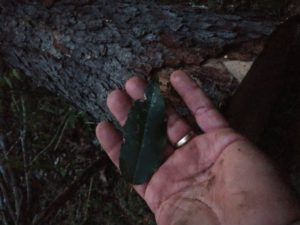 Knowing how to identify wild cherry is the first step to eliminating the treat it posses to grazing animals.

There is only a danger when leaves are wilted. For this reason, most farmers remove cherry trees from pastures. As few as 8 or 10 wilted leaves can yield grave consequences.

To be on the safe side, we recommend animals not consume johnson grass or sorghum hay until it has had 14 days to cure. Grazing is more of a challenge. If we get a light frost and johnson grass just gets burned back it can remain a toxic as it continues to regrow. For reason, I recommend waiting until the plants have turned completely brown, after several frosts, before grazing. Cattle will still readily consume the forage even when brown.

Another issue to be concerned with this time of year is alfalfa. When alfalfa is frosted on, it is more likely to cause bloat when grazed by cattle. Bloat is what happens when cattle do not belch out the gases produced during digestion.

Cattle have a very sophisticated stomach. Their stomach has four chambers. The biggest chamber is the rumen. The rumen is also full of bacteria and other organisms that help the cow digest and thrive on high fiber diets of grass and hay. These organisms create lots and lots of gas as they help with digestion. Belching expels the gas.

When cattle graze high protein legumes, the rumen contents may become “frothy”. This froth prevents the smooth muscle sphincter of the esophagus from relaxing and allowing the gases to escape from the rumen. 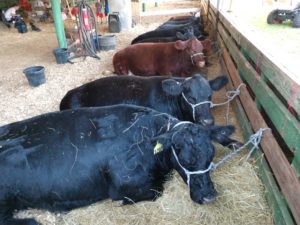 Cattle have a four chambered stomach. The largest chamber is the rumen. Each year over 40 animals are brought to the Caldwell County Agricultural Fair to participate in the Junior Heifer Show.

Eventually, the bloated animal may not be able to take an effective breath because the rumen is pushing on the diaphragm. This leads to suffocation. The good news is bloat is fairly rare. Also, bloat develops over several hours and can be corrected if caught in time by the farmer.

All grazing animals – cattle, goats, horses, and sheep – are susceptible to prussic acid poisoning. Bloat is only a concern with cattle, sheep, and goats. Horses do not have a multi-compartmentalized stomach like ruminant animals, so bloat is not a potential problem for them. However, the most common forage related problem for grazing livestock in Caldwell County is prussic acid poisoning.