Find this article at:
go.ncsu.edu/readext?408040
— Written By Seth Nagy

Below are some more immediate concerns I addressed this week. These are questions that were asked at the Caldwell Extension Center. I hope you find them helpful.

Q: I have black fungus stuff on my Nellie Stevens holly. What do I do?

A: The black stuff is a fungus called sooty mold. It is a frequent problem on the leaves of many evergreen shrubs including azaleas, camellias, laurels, and gardenias. 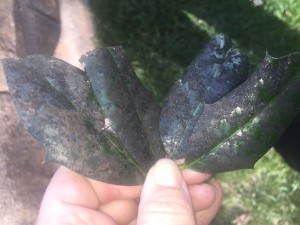 Sooty mold growth on holly leaves. This is really a symptom of aphid, soft scale, or whitefly insect infestation. Controlling the insects will correct the sooty mold problem

It can be a problem on deciduous trees and shrubs, including crepe myrtles, hollies, and silver maples, too. This can even be a problem for plants growing under the affected plants.

The mold is actually a symptom of insect feeding. Insects such as aphids, soft scale, and whiteflies excrete a sugary excrement after feeding. This sugary excrement is affectionately called honeydew. If you solve the insect problem, the sugar deposits will stop, and the sooty mold will slowly go away. There are several insecticides or combinations of insecticides available to control these sucking insects. My recommendation of insecticide depends upon the insect, the host plant, and any safety considerations. Insect identification is really an essential step for controlling this problem.

If you have this problem, look for insects. If there are aphids and the tree is not too tall, the insects can be controlled with a horticultural oil or an insecticidal soap. These products have to contact the insect, so be sure to completely cover the entire plant. Remember to cover both sides of the leaves too. Soft scale and whiteflies typically require a systemic insecticide for control.

Once sooty mold is established, it is not easy to remove. I think the best method is to just wait and it will eventually clear up once the insect issue is resolved. However, colleagues of mine have suggested the mold can be removed by soaking the affected plants in a water and detergent mixture. They recommend 1 tablespoon of household liquid detergent per gallon of water and spray it on the plants. Wait 15 minutes, then wash the detergent solution off with a strong stream of water. You may have to repeat this treatment a number of times over a few weeks.

Q: Do I need to worry about my tomatoes getting late blight?

A: Late blight was detected on tomatoes in a home garden in Beaufort County, SC last week. All these tomato plants were destroyed. By destroying the plants they will not be a source of inoculum to cause further problems. However, if the initial late blight spores blew up from Florida, there will likely be re-infestations that could cause problems for us in North Carolina and Caldwell County.

Late blight affects tomato and potato. The fungal-like organism does not overwinter in North Carolina, but it does survive in Florida and other tropical locations. The spores can travel up the eastern seaboard through transplants and air currents. Typically, the disease is not detected until mid-summer. Having it show up this early in the growing season is a sign that we should be on the lookout.

Symptoms of late blight appear as large dark-green or gray spots on leaves surrounded by a lighter halo or ring. The halo shows where the fungus is active, and the spots are visible on both sides of the leaves. Dark brown spots also appear on the stems and petioles (leaf stems). This symptom is fairly typical of late blight on tomatoes. The disease can cause tomato fruit rot. Late blight can even damage white potato tubers. Though relatively rare, the disease can affect eggplants and petunias, which are related to tomatoes and potatoes. However, peppers, which are also in the same family, are not susceptible.

Late blight caused the Irish potato famine of the 1840s. The fungus-like oomycete pathogen Phytophthora infestans actually is the culprit in this disease. It was the first plant disease that was determined to be caused by a microorganism, which gave birth to plant pathology as a science.

For homeowners, the best defense against this, and our other diseases, is to purchase disease free plants. Also when planting in the garden, mulch around the plants to keep soil from splashing onto the leaves. Keep your plants healthy and growing with proper fertilization.

As always, for answers to your agricultural questions, call the Caldwell County Extension Center at 828-757-1290, or visit us online anytime at //caldwell.ces.ncsu.edu.