What Is the White Flowering Tree on the Lenoir Greenway?

Find this article at:
go.ncsu.edu/readext?405675
— Written By Seth Nagy

Spring temperatures and longer days have made this week perfect for getting out and walking. Caldwell County has some great walking trails that make it easy to enjoy a leisurely stroll or something more vigorous for those wanting to get their heart rate up. One thing I like about the walking trails and greenway paths is the variety of plants that grow along the edges. There is everything from huge trees like sycamores to smaller flowering plants such as trilliums.

This week I was asked “What is the white flowering tree on the Lenoir Greenway? The tree has a series of white blooms that droop down from the branch. They look like little bells”. 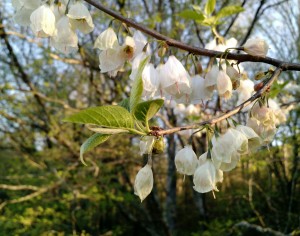 Silverbells – This is a native flowering tree. Its home range is the southern Appalachian maintains and Piedmont. The common name, Carolina Silverbell.

The scientific name for Carolina Silverbell is Halesia tetraptera.The genus, Halesia, is pronounced Heylzʹ-ee-ah, and is named after Stephen Hales (1677-1761). He was an English scientist and author of the famous book, Vegetable Staticks. His non-botany accomplishments were impressive. He was the first person to measure blood pressure, he developed an artificial ventilator, and he invented surgical forceps.

Silverbells thrive in rich, well-drained soils with plentiful organic matter. The soils where they naturally occur are slightly acidic (pH 5.0 to 6.0), and there is an accumulation of leaf litter as mulch. These trees can tolerate moderate droughts once established. They do best planted on floodplains, along stream banks, or on lower slopes of ravines.

If silverbells are planted into heavy clay soil, amend the soil with organic matter, such as leaf compost or composted pine bark. Thoroughly mix in organic matter at the rate of 20% by volume to improve soil aeration and drainage. Fertilize in the spring with azalea the first few years to help them become established. Limestone should not be added when planting these trees in the landscape.

These trees can be propagated from seed or softwood cuttings. Collect seed in October. The seed will typically germinate the second spring. A cold stratification, followed by warm, followed again by cold is required to break seed dormancy and get germination..

Softwood cuttings taken during the summer can be rooted. As with most woody deciduous shrubs, the best month to take cuttings is June. Treat softwood cuttings with a rooting hormone. Put the cuttings under mist or in a high humidity enclosure. Root cuttings in pots or cells in which they can grow, be hardened off, and over-winter to minimize root disturbance. They can be repotted in the spring.

As the silverbells blooms begin to fade, be on the lookout for doghobble. 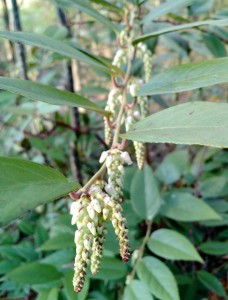 Doghobble – Be on the lookout for Doghobble. It is the next plant to produce white droopy flowers on the Lenoir Greenway.

It is the next plant that will bloom with drooping white blooms along the Lenoir Greenway. As always, for answers to your agricultural questions, call the Caldwell County Extension Center at 828-757-1290 or visit us online anytime at caldwell.ces.ncsu.edu.