Troubleshooting and Scouting for Diseases

Find this article at:
go.ncsu.edu/readext?470459
— Written By Eli Snyder and last updated by Tina Lovejoy

Question: My tomatoes are big and healthy but have no blooms. What is going on?

Answer: The most likely reason that tomatoes get large and look healthy but do not produce blooms is because they have received too much nitrogen fertilizer. Nitrogen in fertilizer encourages vegetative growth or growth of the foliage and stems. If the plant receives too much nitrogen, it gives a tomato the signal to keep producing leaves and to hold off on flower production. Too much nitrogen fertilizer can also lead to a condition called pith necrosis in tomatoes. This is a bacterial infection that tomatoes acquire through the roots and it attacks tomatoes when they are growing too fast. This is usually caused by high levels of nitrogen fertilizers, cool nights, and warm soil such as that found under black plastic. Unlike the plant with no blooms, a tomato with pith necrosis will look unhealthy. Symptoms include yellow, wilting leaves, brown lesions on stems, adventitious roots growing along the stems, brown tissue in the middle of stems and fruit. The plant can grow out of pith necrosis and produce some healthy fruit if the damage is not too severe.

Tomatoes need just the right balance of fertilizer to produce healthy amounts of foliage and fruit. The first step in achieving the correct fertility is to take a soil test and apply lime and fertilizer according to recommendations in the soil test. If no soil test has been done, incorporate 3 lb per 100 sq ft of a complete 5-10-10 fertilizer, or 1 lb per 10 foot of row to the area before planting. Organic gardeners can use balanced organic fertilizers such as 3-4-4 at a rate of 7.5 lb per 100 sq ft or 2.5 lb per 10 feet of row. Then, plan to sidedress the tomatoes with nitrogen fertilizer monthly through the season. Calcium nitrate (15.5-0-0) is a popular choice and can be applied at 2 lb per 100 foot of row, and organic gardeners can apply bloodmeal (12-0-0) at 2.5 lb per 100 feet of row. Applying more than this or applying all of the nitrogen fertilizer early in the season will lead to problems like lack of flowering or pith necrosis.

Q: My pepper plants have brown angular spots on the leaves. What is going on? What should I do? 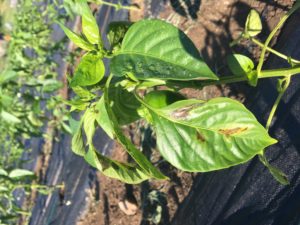 Bacterial leaf spot is characterized by brown lesions, often with yellow halos around the spots.

Peppers and other vegetable crops are susceptible to many foliar diseases, and gardeners should scout for these diseases early and often. Common diseases of tomatoes and potatoes include early blight, leaf mold, and several leaf spots caused by different fungi and bacteria. Bacterial leaf spot and anthracnose are common on pepper, and anthracnose and powdery mildew are common on cucumbers, squash, and melons. These diseases damage the plant by reducing the amount of energy the plants can capture through photosynthesis. Some of them also cause damage to fruit, reducing the edible portion or shortening the shelf-life of the fruit.

Many of the diseases are present in soil or on plant residues and their development is favored by the weather conditions we have had lately- cooler temperatures, high relative humidity, and ample precipitation. The exception is powdery mildew, which develops when leaf surfaces are dry. These diseases are present in soil or plant residues and can sometimes travel with rain and wind. To prevent the spread of these diseases, reduce soil contact with leaves by mulching with straw or plastic, water in the morning to reduce leaf wetness overnight, and remove diseased leaves upon finding them. 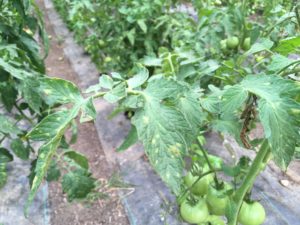 When the disease is identified, prevent its spread by removing infected leaves when leaves are dry. You can also apply a protectant such as a copper-based fungicide, or biofungicide such as those containing Bacillus subtilis to prevent further spread of the disease. Apply the product as recommended on the label while conditions are favorable for disease development.

Other common diseases such as late blight of potato and tomato (Phytophthora infestans), and cucurbit downy mildew (Pseudoperonospora cubensis) that affects cucumber, melon, and squash, do not overwinter in this area and do not typically appear until later in the season. Both of these diseases are capable of sexual and asexual reproduction. They are often more devastating and difficult to control than the other foliar diseases, in part because they spread rapidly. Late blight is the disease that caused the Irish Potato Famine. We get the disease most years when it travels in with the jet stream from more southern locations. Symptoms of late blight include gray or brown lesions on leaves and stems, and water-soaked brown spots on tomato fruit. Late blight can wipe out a crop within a matter of days if conditions are appropriate. On potato, it will cause dieback of the foliage but will also move down into the tubers. Potato tubers infected with late blight will rot in storage.

Cucurbit downy mildew is characterized by angular yellow or brown spots on the upper side. Grey or purplish spores are often found on the underside of the leaves. Late blight and cucurbit downy mildew have both been identified in Eastern North Carolina this year, so we should already keep an eye out for these diseases this summer. The same protectants such as copper-based fungicides or biofungicides can be applied to prevent infection. Apply a protectant as soon as the disease is identified or even before symptoms occur, if the disease is identified in the county or in a neighboring county.

There are forecasting websites that track the movement of these diseases and you can sign up for alerts and also report the disease if you have identified it. For cucurbit downy mildew, see cdm.ipmpipe.org, and for late blight. Suspicious symptoms may also reflect a nutritional issue such as magnesium or potassium deficiency; these should be ruled out before applying a fungicide or assuming a disease is getting established. If you suspect you have one of these diseases, or if you would like assistance identifying a potential disease or nutritional issue, please contact the Caldwell Extension Center at 828-757-1290.