Find this article at:
go.ncsu.edu/readext?495590
— Written By Seth Nagy and last updated by Tina Lovejoy

Each week brings new and interesting questions to the Caldwell Extension Center. The theme of this week’s questions is unwanted pests. I hope you find these questions and their answers helpful.

Question: I think I found fire ants. What should I do?

Answer: Fire ants, or more specific, red imported fire ants, have not naturalized to Caldwell County. However, much of North Carolina has become home to these critters, including Catawba County. I’d like to share a little about these ants before discussing control.

The first concern with fire ants is the sting – or more correctly, the bite and the sting. Fire ants use their mandibles to get a good anchor before plunging their stinger into the skin and injecting venom. Fire ant venom contains two major components: alkaloids and proteins. The oily aliphatic alkaloids (i.e., the piperidine alkaloid, Solenopsin A) are toxic to cells. Piperidine is a relative of piperine, the main chemical ingredient in black pepper.

The biting, stinging, and venom injection all work together to reinforce the ant’s common name. 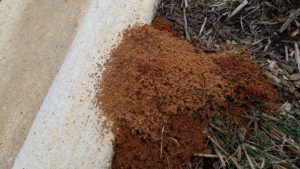 Red imported fire ant mount found in Caldwell County. These ants like open sunny locations and often locate next to concrete, pavement, and utility boxes. When disturbed they mount an organized attack.

Those who have not been stung may mistakenly think their name relates to their red color. Once you feel the burn, you’ll know differently. Fire ants actually range in color from red to brown. They also vary greatly in size from 2mm to about 10 mm.

In all reality, the fire ant sting is only slightly worse than that of a sweet bee. However, victims are seldom attacked by just one ant. When fire ant mounds are disturbed, the ants release an alarm pheromone that signals the entire colony of danger. This allows them to work together in defending their home.

The next question that comes to mind with fire ants is how did they get here? The original introduction occurred back in the 1930’s in Mobile, Alabama. It is likely a cargo ship that transported them from South America to Mobile. Since the initial introduction, they now infest more than 325 million acres. Their range comprises most of eleven southern states and Puerto Rico, with infestations also in New Mexico and California. They have also spread to northern Mexico, Australia, Taiwan, and China.

The red imported fire ant moves in two basic ways – naturally and artificially. Artificial movement is when a colony or a mated queen “hitchhikes” in infested soil, sod, nursery stock, and other materials that are transported to a new location. Often, this is associated with construction or homeowners that have a residence where fire ants have naturalized. These “hitchhikers” can be controlled if caught early.

These insects also spread by natural means. This happens when newly mated queens fly into new and uninfected areas. Winged fire ant queens can fly about 3 miles on their own. However, when blown by wind currents, winged fire ants can travel much greater distances.

At one time, it was thought red imported fire ants would not survive in colder climates. This is incorrect. These tropical insects are thriving in locations colder than Caldwell County. So, if you find a fire ant mound on your property this fall, the best thing to do is treat it with a mound drench. During the summer, there are other control options, but for single mounds in the fall, treating with a drench is best.

A drench is simply a liquid mixture of insecticide and water. This is poured directly on the mound and around the mound perimeter. Many insecticides are effective drenches. Popular products for homeowners have the active ingredient bifenthrin, lambda-cyhalothrin, and carbaryl. In pasture and hay fields, carbaryl is the only product approved for use. A good rule of thumb is to apply 1 gallon of drench per 6 inches of mound diameter. Read and follow the labeled directions on the pesticide to know how to mix the product and to learn additional information.

At some point in time, fire ants will be naturalized to Caldwell County. Eradication is not a realistic goal with fire ants. There are effective management strategies. Unfortunately, this will probably not be the last fire ant question we receive at the Caldwell Extension Center. For information on Nc quarantine area click ncifaquarantine

Question: I’m trying to clean up an area that has a fair amount of volunteer Bradford pears and honeysuckle. Can you recommend something to spray or paint on the cut ends that will kill these as I clear the area?

Answer: You can have good success with glyphosate (RoundUp) or triclopyr (Remedy) used as a cut stump treatment. Both of these herbicides can be found with generic labels. The generic products are less expensive than the brand names (RoundUp and Remedy). In my experience, if the pear trees are larger than an inch or two, triclopyr will give better results than glyphosate. Also, if there is some grass in the area, triclopyr will not kill the grass. Triclopyr also works better when used in the dormant season.

Be sure to read and follow the label for a cut stump treatment. When I do a cut stump treatment, I use a dye so I can tell what I’ve treated and what I’ve not treated. You can use a paint brush or paint sponge. Sometimes a squirt/spray bottle works well when treating larger stumps. Either way, I find that if I put the container with the cut stump treatment herbicide mixture into a five gallon bucket, it is easier to find and less likely to tip over as I’m working. A bucket also keeps the herbicide contained should there be a spill.
For answers to your agriculture questions, call the Caldwell County Extension Center at 828-757-1290 or visit us online anytime at https://caldwell.ces.ncsu.edu.