Find this article at:
go.ncsu.edu/readext?509123
— Written By Seth Nagy and last updated by Tina Lovejoy

More fire ant mounds are being discovered in Caldwell County since the first one was found last fall. 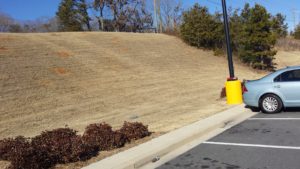 The picture was taken by Jackie Nagy in Hudson, NC. It shows 13 red imported fire ant mounds on the hill side. When the weather warms they should be treated so people and pets do not get stung when visiting this retail establishment.

It is likely most of these mounds are from the natural spread of established colonies in Catawba and Burke Counties.

Red imported fire ants got their foothold in North Carolina in 1957. They started in Brunswick County (Wilmington, NC) and have since spread to 74 of the 100 counties in North Carolina. It has taken 60 years and 230 miles, but these invasive stinging-biting insects are now at the county line.

I have received some calls about mounds that are visible in the landscape right now. The question is how to treat the mounds or what to do about them. And my recommendation is to do nothing . . . right now. Patience is the best course of action!

Temperatures are too cold. Even though disturbing the mounds causes some ants to come to the surface, it is too cold to effectively control the colony. Our record cold temperatures have pushed the main part of the colony deep in the ground. The colony may be as deep as 10 feet below the surface. And it is just about impossible to get an insecticide this deep into the ground.

Hopefully, some of the mounds we are seeing are empty from the cold weather, but new ones may show up this spring. It is just a guessing game right now.

Waiting for warmer temperatures will give better results when treating fire ants. Treating now, when it’s cold, will only kill some ants that wander up to the top of the mound. The rest will not be affected and may just move laterally in the soil, away from the insecticide.

This spring, when temperatures warm up for several days in a row, the ants will become active and move closer to the surface. This is when mound drenches and baits will be more effective.

A mound drench is just like it sounds. It is a mixture of insecticide and water that is poured into the mound. To be effective, the drench must penetrate throughout the mound and contact most of the fire ants in the colony. Ants die quickly when they come into contact with the insecticide.

The other main treatment for fire ants are baits. A bait is really a poison mixed with an attractive food carrier. The nice thing about a bait is you don’t have to locate each mound. The foraging ants will bring the poison bait back to the colony.

Red imported fire ants like fatty, greasy foods. They like things such as potato chips and hot dogs. These snacks can be used to check for fire ants. Place a potato chip in a suspected fire ant area near a mound. Don’t place the chip on the mound. We don’t eat on the roof of our houses and they don’t either. If the ants are active foraging, they will be all over the chip. If not, it may be too cold or the colony may have died. The fire ants are most active between 70 and 85°F. Too cold, and they stay in the mound until it warms. If it is too hot during the summer, the ants will forage at night when it is cooler.

When it does warm again this spring, the best approach to fire ant control is combining the two control methods, the bait and the drench. This approach is called the “Two-Step Method”, and it is highly effective.

Step one is to bait the area. Do this in the spring when temperatures are in the 70 to 85 degree range for a few days and you’ve checked to be sure the ants are active. A week later, take step two. Drench any mounds that are in highly sensitive areas where people are likely to be stung. This would be sidewalks, near buildings, etc.

The two step method it slightly more involved than a single treatment, but the results are worth the effort if fire ants are an issue on the landscapes.

If fire ants are not present in the landscape, treating is not advised or recommended. Maintaining a native ant population will slow the natural spread of the fire ants. Using insecticides that control fire ants will also control native ants and insects that are beneficial.

Whenever using and applying insecticides, it is important to read and follow the labeled directions. When these products are used properly, they are designed to kill the pest. And when used improperly, they still have the potential to kill, too.

To learn more about red imported fire ants and control recommendations, visit our online factsheet at (https://entomology.ces.ncsu.edu/red-imported-fire-ant/) or contact the Caldwell Extension Center at 828-757-1290 for a copy.