Find this article at:
go.ncsu.edu/readext?516822
— Written By Seth Nagy and last updated by Tina Lovejoy

For most people, technology has crept into every facet of their daily lives. Technology can improve our lives. However, when it comes to food production, the general public does not seem to value or appreciate technology. Typically, technology discussions in agriculture quickly lead to philosophical discussions about genetic engineering. When this happens, the conversation becomes two sided, and people are either “for” or “against” the technology. No real advancement in understanding takes place and emotional gridlock sets in.

Facial recognition for cattle… Cargill and Cainthus announced on January 31, 2018 that they were working on facial recognition in cattle. This advanced imaging will be used to monitor the health and wellbeing of cattle. 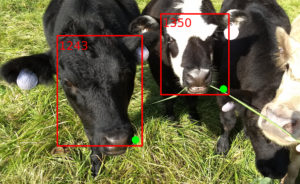 Facial recognition software will assist farmers in monitoring the health and well being of their herd.

Their proprietary software uses images to identify individual animals based on hide patterns and facial recognition. This will then be used to track feed and water intake, heat detection, and behavior patterns. The software will help the farmer improve milk production, reproduction management, and overall animal health. Basically, it will allow farmers to be notified if an animal has a significant deviation in its daily behavior. This would then trigger the herd manager to take a closer look at this animal. Providing targeted care allows for quicker detection of problems and, hopefully, quicker recovery.

Another exciting technology being developed for animal agriculture is a virtual fence system. The company called “No Fence” is a Norwegian Company that started ten years ago. Their goal is to create the world’s first virtual fence system. This technology has the potential to improve animal welfare and the environment. Their technology centers around a network connected GPS collar worn by the animal. Virtual fence boundaries can be set by computer or cell phone. This information is sent directly to the animal’s collar.

The collar warns the animal with a tone that it is getting close to the virtual fence boundary. If the animal does not turn around, a “weak but effective” shock is given. This system allows for fields to be grazed that might be impractical to build a fence. It also allows for animals to continually move, giving the forage a rest period.

Since they are difficult to fence in, goats were the test animal for this project. The company is currently taking pre-orders with delivery being some time in 2019. The selling points are: no costly fence maintenance, simpler approach to herd control, more varied pastures, and more sustainable farming.

Another technology on the horizon is remote pinkeye detection. A grant application was submitted by Stilwell Technology and Robotics to the United States Department of Agriculture to develop remote pinkeye detection. This technology, coupled with unmanned aerial vehicles (a.k.a. drones), would allow for early detection and treatment of this disease complex. Current studies show that treating this disease early improves the outcome for the animal. Left untreated, animals can lose their eyesight.

I’m also proud to share some home grown technology adaptation. A Caldwell County farmer in Grandin has been using his DJI Phantom 3 quad-copter to herd his cattle. 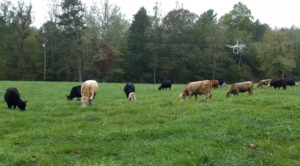 Unmanned aerial vehicles like the one  pictured can be used to herd cattle from one pasture to another.

It might be surprising for some to think of farmers and technology in the same sentence. However, they go together hand in hand. Technology and farming have a very long relationship. Necessity is the mother of invention. For anyone who has ever farmed, you can attest that a farm has an unlimited supply of necessity. I have never met a farmer that is completely satisfied. They naturally like to tinker and improve with each season. Farmers often mix new technology with proven techniques.

Farmers have always been evolving and taking advantage of both science and practical application. This is how agriculture has evolved to feed so many people. This system is still evolving today, and it will still be evolving tomorrow.