Find this article at:
go.ncsu.edu/readext?524681
— Written By Seth Nagy and last updated by Tina Lovejoy

Question: Why do honey bees swarm?

Answer: A swarm of honey bees is just the insect colony’s way to split and search for a new home. Swarming is how honey bees start new colonies.

When a swarm occurs, a queen bee leaves the nest with about two-thirds of the hive’s worker population. 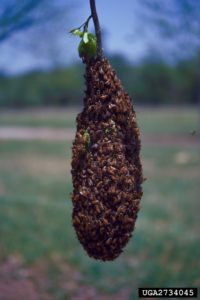 A queen bee and worker bees form a hanging cluster as they wait for scout bees to locate a new home for this swarm. image credit G. Keith Douce, University of Georgia, Bugwood.org

Once outside the hive, the bees will congregate on a branch or some other object and form a hanging cluster. Then scout bees go out and search for a new suitable home for the colony.

Swarming bees are not normally aggressive. However, it is best to avoid getting too close to swarming bees if you are allergic to bees or have a fear of them.

The old colony left behind is inherited by a newly formed daughter queen. Since this old colony is only one-third of its former strength, it is relatively small and weak. However, they do have the benefit of an established home. This small hive works to rebuild it strength/numbers.

Swarms normally occur in spring and early summer. Bees are more likely to swarm when they feel crowded or the hive has poor ventilation.

Swarming is also more likely as the queen ages. As the queen gets older, she produces less and less queen pheromone.

This peanut-shaped structure is called a queen cell. This cell indicates that this colony may swarm. image credit Carl Dennis, Auburn University, Bugwood.org

Pheromones are important chemical communication signals in the hive. There are several of these communications chemicals that are produced by bees.

The queen pheromone attracts workers from a short distance, and causes them to lick and antennate the queen in a “retinue response”. The workers in the retinue thus pick up the pheromone and spread it throughout the colony. If workers don’t receive enough of the queen’s pheromone, they start raising new queen bee. Swarming is part of this natural queen-raising process by the colony.

If you see a swarm of honey bees, you can contact the Caldwell Extension Center at (828)757-1290 and we can share contact information of local beekeepers that can collect the swarm and give it a good home. They have informational bee meetings on the third Thursday of each month at 6:30 p.m.

Question: I found fire ants in my pasture. What should I do to control them?

Fire ants are now another new insect that is making Caldwell County its home. Fire ants will be added to the growing list of invasive pests that have appeared during my career in Caldwell County. This partial list includes brown marmorated stink bugs, hemlock wooly adelgid, palmer amaranth, ambrosia beetles, glyphosate resistant ryegrass, and kudzu bugs.

I had hoped red imported fire ants would not have arrived during my lifetime in Caldwell County. 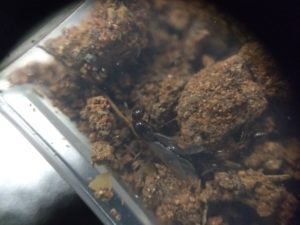 This is a winged female red imported fire ant. She has the ability to fly and start a new colony. She was captured in Caldwell County this spring. Image credit Seth Nagy

Unfortunately, the reality is they are here, like it or not. The good news is they can be “managed”, but this does take time and money.

The management options for red imported fire ants in pastures and hay fields is to use a poison bait or a mound insecticide drench. A third option is to combine these two approaches into the “two-step method” where bait is applied, and then mound drenching is used 7 to 14 days later. The drench is used for mounds that are in high traffic locations or sensitive areas.

The baits work well, but they don’t work fast. Baits containing hydramethylnon (Amdro Pro), pyriproxyfen (Esteem), (s)-methoprene (Extinguish), or a mixture of hydramethylnon and (s)-methoprene (Extinguish Plus) are currently labeled for use in cattle pastures. In addition, Award Fire Ant Bait (containing fenoxycarb) can be applied to horse pastures.

Individual fire ant mounds can be treated by drenching with a mixture of insecticide and water. 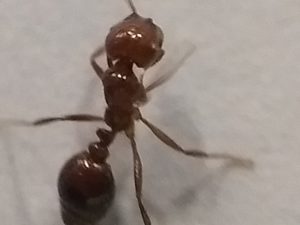 Red important fire ants are aggressive. This fire ant was collected in Caldwell and is waking up after being put to sleep with rubbing alcohol. Fire ant workers vary in size from 1 mm up to 6 mm. Image credit Seth Nagy

Fire ant baits currently available for pasture and hay fields work well when applied according to label instructions. The key to using baits is patience. If you use a bait product and apply it properly, a broadcast application should give 80% to 95% control.

For answers to your agricultural questions, call the Caldwell County Extension Center at 828-757-1290 or visit us online anytime.