Find this article at:
go.ncsu.edu/readext?535147
— Written By Seth Nagy and last updated by Tina Lovejoy 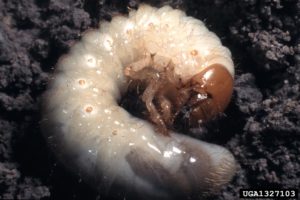 There are over 30,000 species in the scarab beetle family.

Japanese beetles are the most damaging grubs we see in Caldwell County. However, a relatively new pest, the oriental beetle may become a problem in the future.

Regardless of the species of white grub, they all have cream colored bodies with yellow to brownish heads and six legs. Mature grubs vary in length from 1⁄4 to 1 1⁄2 inches, depending on the species. All white grubs have a very distinct curled, or C-shaped, position.

White grubs have a one-year life cycle and spend about 10 months of that cycle in the ground. The timing can vary a few weeks among the different species, but eggs are laid in early July and the larvae hatch out two weeks later. These larvae feed on grass roots until cool weather arrives in October. In November, the grubs burrow deeper into the soil to over winter. The grubs return to the root zone and begin feeding in March. Larvae pupate, and adults emerge in May and early June to begin the cycle over again.

To scout for potential grub issues, wait until August and use a heavy-duty knife or a spade to cut a 1-square-foot flap of sod and roll it back. Examine the soil and roots in the top 3 or 4 inches. Repeat this process in several locations. If you find an average of five or more grubs per square foot, a curative pesticide application is justified.

Curative treatments applied in late summer or early fall are more effective than spring applications because the grubs are smaller and easier to control. No matter which product or approach is selected, be sure to read and follow label directions.

A biological treatment method, useful against only Japanese beetle grubs, is the application of milky spore bacteria. When this commercially available bacterium is used, it infects the grubs and produces a disease. Grubs in the soil come in contact with the spores through ingestion. The spores germinate inside the grubs, eventually killing them. 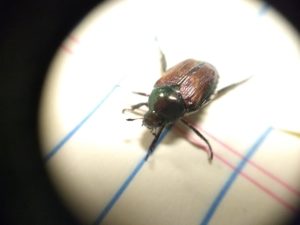 Japanese beetle larva are the most destructive white grubs in Caldwell County lawns. The adults are very recognizable with their metallic appearance. These beetles feed on many plants, but roses and grapes are among their favorite.

These spores work best when applied in late September or early October to soil with a pH level between 6 and 7. The results are not as rapid as with chemical insecticides, but the effects last many years.

When milky spore disease becomes established, it will spread naturally to adjoining, untreated areas. This product is available under such trade names as Doom®, Japidemic®, or Milky Spore.

For answers to your agricultural questions, call the Caldwell County Extension Center at 828-757-1290 or visit us online anytime at //caldwell.ces.ncsu.edu.