Find this article at:
go.ncsu.edu/readext?563500
— Written By Eli Snyder and last updated by Tina Lovejoy

During November, you may encounter trees with orange, fleshy fruit ripening and falling to the ground once they are just sweet enough to eat. These trees are the native persimmon (Diospyros virginiana), and indeed, the fruit is astringent, and offensive to the palate until they are fully ripe. 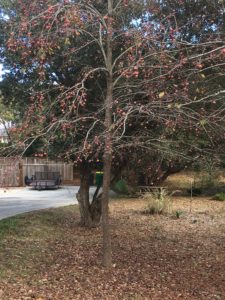 You may have tasted them in a pudding or sauce for holiday meals. We have few native edible fruit trees and shrubs, but native plants are generally easier to grow and have fewer pest issues than our introduced and domesticated fruit, such as the apple tree. Some people choose to plant Oriental persimmons (Diospyros kaki) over the native persimmon because there are some less astringent varieties among them. These can be eaten while still firm, which makes them easier to hold and sell before the fruit is too mushy to be marketed. Some of these varieties also have fewer or no seeds, compared to the native persimmon, which is quite seedy. Oriental persimmons are not as hardy as their native counterpart and may die or be injured during cold snaps in our winter. Given their tendency to offend some palates while pleasing others, persimmons are considered hog feed in some areas and a winter delicacy in others.

Eating locally grown and native foods is one way we can connect with the community and land that supports us. While eating a ripe native persimmon from a nearby tree, you recall that someone else enjoyed this same delight in the North Carolina Piedmont centuries ago, and you are carrying on this culture of local foodways. Native persimmons are a medium-sized (30-60 feet tall) deciduous tree. They are dioecious- that is, they have both a male and female tree. Both are required for pollination and fruit production, but only the female tree will bear fruit. Even with both male and female, persimmons can be fickle about producing fruit- they may only produce once every few years. But if you’re looking to incorporate more edibles into your native landscape, persimmons are worth considering. 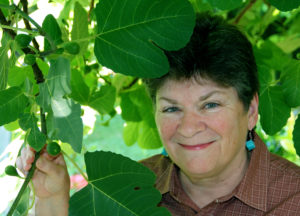 If you are interested in local foods and native edibles, consider attending a free talk and book signing with author Georgann Eubanks on Thursday, November 29, 2018, at 4 p.m. at the Caldwell County Public Library in Lenoir. She will be speaking about her current book, “The Month of Their Ripening: North Carolina Heritage Foods through the Year,” released by UNC Press. Telling the stories of twelve North Carolina heritage foods, each matched to the month of its peak readiness for eating, the author takes readers on a flavorful journey across the state. She begins in January with the most ephemeral of southern ingredients—snow—to witness Tar Heels making snow cream. In March, she takes a midnight canoe ride on the Trent River in search of shad, a bony fish with a savory history. In November, she visits a Chatham County sawmill where the possums are always first into the persimmon trees.

Talking with farmers, fishmongers, cooks, historians, and scientists, Eubanks
looks at how foods are deeply tied to the culture of the Old North State. Some
have histories that go back thousands of years. 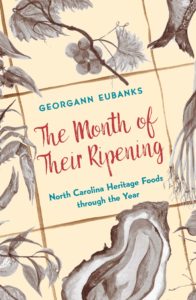 Garlicky green ramps, gathered
in April and traditionally savored by many Cherokee people, are now endangered
by their popularity in fine restaurants. Oysters, though, are enjoying a comeback,
cultivated by entrepreneurs along the coast in December. These foods, and the
stories of the people who prepare and eat them make up the long-standing
dialect of North Carolina kitchens. But we have to wait for the right moment to
enjoy them, and in that waiting is their treasure.

Georgann Eubanks is the author of the three-volume North Carolina Literary Trails series of guidebooks commissioned by the NC Arts Council and published by UNC Press. Georgann has published poetry, fiction, profiles, reviews, and essays in many magazines and journals, including Southern Cultures, South Writ Large, Our State, and Oxford American. Since 2000 she has been a principal with Donna Campbell in Minnow Media, LLC, an Emmy-winning multimedia company that primarily creates independent documentaries for public television.

Eubanks has taught creative writing and the power of story to nonprofit leaders, UNC undergraduates, public school students, and adult writers in many contexts. Her time teaching in the Artists-in-the-Schools program brought her to Caldwell County during the 1980s, when she would spend 6 weeks at a time working in middle schools. During this time, the Caldwell Arts Council was voted to have the best Artists-in-the-Schools Program in the state by the NC Association of Arts Councils. Eubanks is director of the Table Rock Writers Workshop, held at Wildacres in Little Switzerland, NC, and a founder of the North Carolina Writers Network. She is the current president of the North Carolina Literary and Historical Association.