Find this article at:
go.ncsu.edu/readext?566643
— Written By Seth Nagy and last updated by Tina Lovejoy

American farmers know the best predictor of soybean prices is the weather in China. If the weather is good in China and they have a good soybean harvest, they don’t need to purchase as much on the world market for their needs. However, if the weather is poor in China and the soybean harvest is low, then China purchases more soybeans and the price goes up. This is the fundamental law of supply and demand. However, other forces are currently at work affecting soybean prices for United States farmers.

In the United States, half of all soybeans grown are exported to other countries. Brazil is the other major exporter of soybeans. Both the United States and Brazil export about 240 million bushels of soybeans each per year. To put this quantity into perspective, if the entire 240 million bushels were exported in semi-trucks, it would form a line over 3,000 miles long. This is about the distance from Myrtle Beach to Los Angeles.

China is the largest purchaser of soybeans in the world. They purchase 60% of all the soybeans traded on the world market. So, China purchases approximately 30% of all soybeans grown in the United States.

Soybeans are high in both oil and protein. 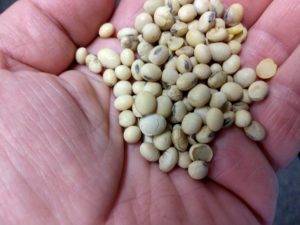 Soybeans are high in both oil and protein.

Crushing the soybean separates the whole soybean into soybean oil and high protein meal. The oil is used mainly for human consumption, and the protein meal is a component of many animal diets, including pigs.

Part of China’s need for soybeans is to feed pigs. They lead the world in pig production with 433 million hogs. By comparison, the United States raises 73 million hogs annually.

China and the United States are currently locked in a trade war. Each country has introduced tariffs on goods that are traded between each other. Last year, the United States sold China 12.4 billion dollars worth of soybeans. China placed a 25% tariff on US soybeans.

The tariff has increased the cost of United States soybeans in China. With the increased price,  demand has dropped for the US soybeans. With fewer soybeans being sold to China, the United States now has a surplus, which causes the price to drop in the US.

To help US farmers weather this trade war, Congress has authorized payment to US farmers. This will be a help, but ultimately, the free market is preferable to government payments. I heard the slogan “trade not aid” recently to express this concept.

I know many US farmers will weather this current crisis. However, the economics of agriculture are a challenge. Like any business, it must be profitable to remain in business.

There are about 800 acres of soybeans grown In Caldwell County. North Carolina ranks 18th in the nation for soybean production, with Illinois and Iowa alternating for the top producing State each year.