Find this article at:
go.ncsu.edu/readext?594589
— Written By Seth Nagy and last updated by Tina Lovejoy

This week I want to share three questions we received at the Caldwell Extension Center. I hope you find these questions and their answers helpful.

Why are wild pear trees popping up everywhere?

In Caldwell County, and most of the east coast, untended fields will grow up into briars, blackberry canes, and field pines. After many years the field will become a forest of maple, oak, or pine. However, we now see pears as one of the early succession species. 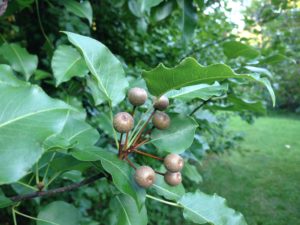 Seeds in the fruit of the Chinese callery pear are spread by birds and cause unwelcome “volunteer” trees. (credit Purdue Extension)

Most ornamental pear trees originate from Pyrus calleryana also called the callery pear. This pear species is native to China. As with many plant species that originate in Asia, they have the potential to spread. Birds, especially starlings, enjoy eating the small fruit that develops and in turn scatter the seeds as they fly. The oldest cultivar of ornamental pear is the ‘Bradford’ which made its debut in the early 1960s. 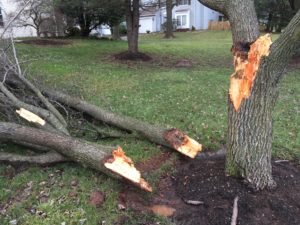 The poor branching of Bradford pears makes them susceptible to breakage during high winds or icy weather. (credit Famartin)

Lots of Bradford pears have been planted. This tree is hardy, it has good fall color, rapid growth, and an abundance of white flowers in spring. The down side of the Bradford pears are poor structure. The crotch angles of the limbs are extremely narrow which makes them susceptible to breaking in moderate wind and ice storms. The Bradford pear is sterile and not able to bear viable fruit.

Later cultivars such as ‘Cleveland Select’ and ‘Chanticleer’ were bred for better structure so they were less susceptible to breakage during wind and icy storms. Unfortunately, these are able to cross-pollinate with ‘Bradford’ and some viable fruit are formed.

The fruit formed from these crossed species of the Chinese callery pear are what is taking over untended fields. To make things worse, the invasive offspring of these ornamental pears often have large thorns. 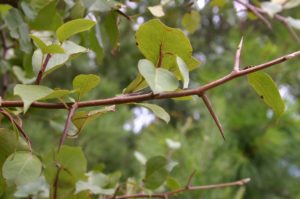 Thanks to Colby Griffin, the horticulture agent in Franklin County, for assistance with this reply.

What is this weed with small delicate flowers? They seem to be everywhere this year and I’ve not noticed them before. 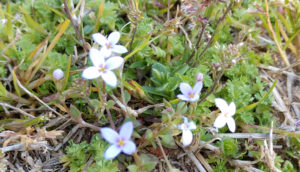 Bluets can be found from Arkansas to Canada. (credit Seth Nagy)

These are called bluets, Quaker ladies or innocence. They are in the Rubiaceae (Madder) family and specifically in the genus Houstonia. Bluets are a native perennial widlflower that can be found from Arkansas to Canada. Typically I find them growing on poorer soils where there is less competition from faster growing weeds/plants. They are common in woodland areas, but can also be cultivated in garden spaces, where they prefer a shady or partially shaded spot.

How do I control broomsedge in my pasture?

Broomsedge is a native warm-season perennial grass. It appears in pastures that have an underlying nutrient issue. Broomsedge also produces allelopathic chemicals that prevent other plants from germinating and competing with it. 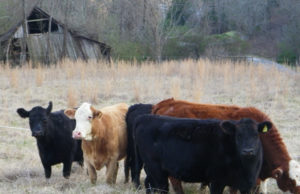 Straw colored broomsedge is easy to see in this photo. Broomsedge is an indication of a low soil fertility. Testing the soil and following the recommendation will correct the problem. (credit Jackie Nagy)

Because broomsedge can be difficult to control once established, prevention is key. Keep pH and phosphorus levels in check with a soil test. Farmers should monitor soil fertility every year or two.

Once broomsedge appears in pastures, it may be there for a season or two. Correcting soil nutrient deficiencies will make broomsedge uncompetitive and it will disappear. Cattle will eat broomsedge for a short period of time in the spring before it matures and becomes tough. There are no good herbicide options for broomsedge. However, correcting soil fertility will control broomsedge.