Q & A: Spring Flowers and Bats

Find this article at:
go.ncsu.edu/readext?599970
— Written By Eli Snyder and last updated by Tina Lovejoy

Springtime brings a mix of questions to the N.C. Cooperative Extension, Caldwell County Center. I will share a couple of questions we have received this week on plant identification and wildlife questions.

Question: What is the yellow-flowering plant I see on the roadside? 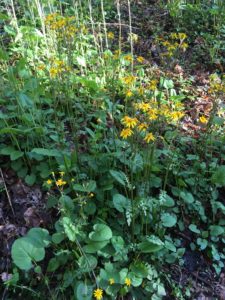 Golden ragwort is a native plant that thrives in wet woodland areas, and is seen blooming along roadsides and in wild areas this time of year.

Answer: This is golden ragwort (Packera aurea or Senecio aurea). Other names include golden groundsel, butterweed, or heartleaf ragwort. It is a native perennial plant, meaning each plant survives year to year. It is a member of the Asteraceae family, also known as the sunflower or composite family. It flowers between March and June, though its leaves are evergreen. It can be found in a variety of habitats- from rich forest floors to poor soils along roadsides, it likes wet sites but can be found in dry sites and a range of shade to sunny conditions. It is mildly toxic to touch or consume and is not a desired plant in pastures. But, it attracts pollinators and can be a good addition to a woodland landscape, particularly in wet areas or on hillsides. To propagate, divide in the spring and plant in new areas.

Walking through the woods this time of year, I often see another plant occupying a similar niche, or space, in the forest floor- garlic mustard. Garlic mustard (Alliaria petiolata) has white flowers and the foliage is similar to that of golden ragwort, though it’s leaves are not evergreen and they tend to be a lighter green color. It is a biennial plant, meaning it survives one winter and then flowers and goes to seed, completing its life cycle in the second year. It is in the Brassicaceae or mustard family. It is native to Europe and was first reported in the United States in 1868 on Long Island, New York. 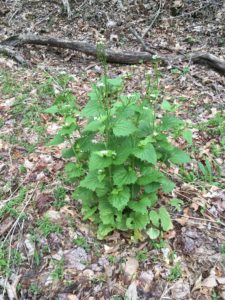 Garlic mustard is a non-native invasive plant that is also blooming this time of year. It competes with our native forest floor species and should be removed when noted.

Unlike golden ragwort, I do not greet its springtime blooms with joy – it is a non-native and highly invasive plant. It grows quickly and reproduces prolifically. In forests, it will outcompete some of our important native forest floor species, such as trillium, trout lily, and bloodroot. It also exudes chemicals from the roots that damage native soil fungi, and through the leaves that can kill native butterfly larvae that feed on the plant. Fortunately, garlic mustard is fairly easy to hand-pull. Try to remove the taproot when you pull them up to prevent re-sprouting. For larger areas, chemical control may be warranted. It is best to stop an infestation early on because each plant produces a large quantity of seed and can cause the patch to grow rapidly. If you are working on controlling an existing patch, this is a great time of year to control it because it is easily identified when flowering, and you can catch some plants and remove them before they go to seed.

Question: I have bats in my house. What should I do?

Answer: North Carolina is home to 17 species of bats, 4 of which are federally threatened or endangered. Bats typically enter homes through unscreened vents, holes in siding, and small crevices around utility ducts. They can consume their bodyweight’s worth of insects, including mosquitos, in a given day. They may enter a home to roost. It is important to seal potential entry points for bats. However, avoid doing so between May 1 and July 31 as young bats, called “pups”, may not be ready to leave the roost, and may become trapped inside. If you have bats in your home, contact a Wildlife Damage Control Agent. Resources can be found on the NC Wildlife Commission website or by calling 866-318-2401.

Bats are not aggressive towards humans – they do not attack but may bite in self-defense. Bats can carry rabies, but the NC Wildlife Commission reports that only 2-4% of bats test positive for rabies on an annual basis. You cannot get rabies by handling bat faces or being in the same building as a bat. In the rare event that you might be bitten by a bat, it is important that you seek immediate medical assistance.

Because bats play an important role in the ecosystem and you may want them around but not in your home, you can consider building bat boxes to provide a space for them to roost. Other ways to promote bat habitat include maintaining mature woodlots as well as permanent wet areas, such as streams, marshes, and ponds. Limiting insecticide use will preserve insect populations necessary for bat forage. For more information on building bat boxes and creating habitat, see our Bats publication. For more information on coexisting with bats, visit the North Carolina Wildlife Resources Commission.