Where Can You Find Chestnut Trees?

Find this article at:
go.ncsu.edu/readext?611092
— Written By Seth Nagy and last updated by Tina Lovejoy

This week I want to share three questions we received at the Caldwell Extension Center. I hope you find these questions and their answers helpful.

Question: I was hoping to find any information regarding chestnut tree planting in western North Carolina, including current farms. I’m looking to acquire an existing farm or to find a suitable property and begin a chestnut tree orchard.

Answer: This was a stumper question for me, so I reached out to my colleagues in western NC. Rob Hawk in Jackson & Swain County told me about Cataloochee Ranch in Maggie Valley. They have an orchard, and they provide tours. Call (828.926.1401) to set up a tour. This is being done in conjunction with the American Chestnut Foundation.

The NC Forest Service has a trial of Phytophthora resistant, as well as chestnut blight resistant, seedlings at their nursery in Crossnore. This, of course, isn’t something anyone could purchase, but I assume this place could be visited.

I also know there are a few American Chestnuts from the American Chestnut Foundation’s breeding program planted in Caldwell County. These trees are resistant to the chestnut blight. The largest of these plantings is at Patterson School in Happy Valley. I believe they have six or eight trees. 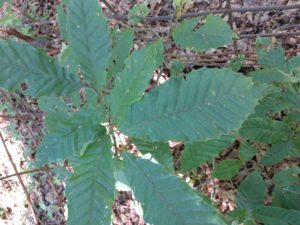 Question: My neighbor has chickens, turkeys, and dairy calves. They often run free around the neighborhood, including the adjacent church property. What can be done?

Answer: In this case, North Carolina General Statutes Chapter 68 entitled “Fences and Stock Law” covers this situation. This is a very short chapter of only a page or so, but the important sections for this question are below. I’ve abridged the important parts of the law to keep this concise, but I encourage reading the entire chapter and to seek legal assistance to interpret the law in your particular situation.

(a)       Any person may take up any livestock running at large or straying and impound the same; and such impounder may recover from the owner the reasonable costs of impounding and maintaining the livestock as well as damages to the impounder caused by such livestock, and may retain the livestock, with the right to use with proper care until such recovery is had. Reasonable costs of impounding shall include any fees paid pursuant to G.S. 68-18.1 in order to locate the owner.

(a)       If any person shall permit any turkeys, geese, chickens, ducks, or other domestic fowls to run at large on the lands of any other person while such lands are under cultivation in any kind of grain or feedstuff or while being used for gardens or ornamental purposes, after having received actual or constructive notice of such running at large, the person is guilty of a Class 3 misdemeanor.

(c)       If it shall appear to any magistrate that after three days’ notice any person persists in allowing his fowls to run at large in violation of this section and fails or refuses to keep them upon his own premises, then the said magistrate may, in his discretion, order any sheriff or other officer to kill the fowls when they are running at large as herein provided.

Question: Found this in a hay field. Any thoughts what it is? (See image) 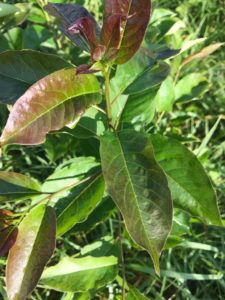 Answer: This is a sourwood tree seedling. Sourwood is a native tree species. I think of it as a pioneer species. It has been one of the many tree species suggested by the USDA – Forest Service to be planted when reclaiming areas that were previously mined or otherwise had the top soil removed.

Sourwood prefers slightly acidic soil. I suggest testing the soil since this is a hayfield. These trees might be an indication there are soil fertility issues.

The scientific name for sourwood (Oxydendrum arboreum) comes from the Greek words oxys (acid) and dendron (tree) and refers to the sour taste of its leaves. The leaves are used as a thirst-quencher by hikers and mountain climbers and were once brewed to make a tonic.

The largest known sourwood in North America is in Robbinsville, N.C. It is 118 feet tall with a 2-foot trunk.

If you have agricultural questions, contact the Caldwell Extension Center at 828-757-1290, or email me at seth_nagy@ncsu.edu.