Cucurbit Pests in the Garden

Find this article at:
go.ncsu.edu/readext?616767
— Written By Eli Snyder and last updated by Tina Lovejoy

The plant family Cucurbitaceae, also known as the cucurbit, pumpkin, or gourd family, is one of the oldest cultivated and most useful, to humans, plant families. The Cucurbitaceae produce many useful fruits, including pumpkins, gourds, melons, cucumbers, and squash. Cultivation of Cucurbitaceae has long been important for human nutrition, through edible fruits, or through gourds used as water- or food- toting vessels.

Among plant families, this one ranks among the highest of those whose plants produce edible fruit for human consumption. Indeed, most of what we consume from this plant family are fruits, or the flesh structure that exists around a seed. The Cucurbitaceae are widely cultivated in gardens across the globe. Nationally, North Carolina ranks eighth in squash and watermelon production, seventh in cantaloupe production, fifth in cucumber production, and fourth in pumpkin production.

Cucurbits can be bountiful, but they are also susceptible to their share of pest challenges. This summer, I wanted to document some of the insects that frequent cucurbits, so that home gardeners can become more familiar with these challenges and more successful at managing them and harvesting a successful cucurbit crop of their desire.

There are several species of cucumber beetles that may affect cucurbits, and as their name implies, they are particularly fond of cucumbers. The different species are yellow with black spots, yellow with black stripes, or a third species has black and cream colored stripes. Cucumber beetles feed on plant leaves and on fruit. On fruit they leave behind rough spots and a gel-like substance where they have been feeding. Cucumber beetles do the most damage, however, by feeding on foliage and transmitting a bacterial wilt to plants. The bacteria infect the vascular tissue of the plant, cutting of water and nutrients, and causing the plant to wilt and stop producing fruit. Once observed, insecticides can be used to reduce populations. Cucumber beetles also enjoy amaranth, and it can be planted close by as a trap crop to attract beetles away from cucumbers.

Squash bugs look like stink bugs and feed primarily on the foliage of squash plants. They have piercing, sucking mouthparts that help them extract sugars from the plant, leaving behind yellowed leaves with brown margins, or edges. They are difficult to control, but some insecticides can be effective, particularly when the squash bugs are in a nymph or immature stage. Their eggs are bronze and often layed in attractive patterns on leaves. Remove those you find to reduce populations. Rotate crops in the garden to delay squash bugs or other pest from finding your cucurbit plants, and bury residues with tillage late in the season where populations have been high.

Pickleworm is a late-season pest that can be problematic in all cucurbits, but particularly winter squash and melons North Carolina. Pickleworm is a worm as its name implies. The adult moth migrates into the region in mid-summer and lays eggs on fruit or flower buds. The eggs hatch, and the worm that emerges begins feeding on immature fruit, creating a round hole in the fruit or flower. It is common to observe their gummy frass, or excrement on the surface of the fruit. The damage leads to premature ripening and rotting of winter squash and melons, and create inedible sections in summer squash. It is difficult to predict when pickleworm will arrive each year, but preventive insecticides once they are first observed in the garden can help reduce damage to the entire crop. Early plantings are not usually damaged, and some varieties, including Butternut 23, Summer Crookneck, Early Prolific Straightneck, and Early Yellow Summer Crookneck. You can also plant susceptible squash near cucumbers and melons as a trap crop- pickleworm may preferentially lay eggs on the squash. 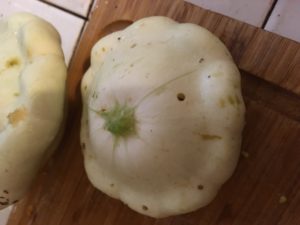 Pickleworm is a late season pest that makes round holes in fruit.

Squash vine borers are a common and very damaging insect in squash plants. A red and black moth lays its eggs at the base of a plant, on the stem or in soil, and when eggs hatch the borer caterpillar bores into the stem and begins feeding. You will see sawdust-like frass where the borer is feeding and the plant will begin to wilt. Preventive measures can be taken to reduce the damage to your crops. Methods include covering your crop with insect netting or row cover until bloom to delay infestation, applying an insecticide with the active ingredient Bacillus thuringensis when you observe moths, or placing a 2” high aluminum collar around the base of your plant that extends into the soil and is at least two inches tall. Once present you can reduce damage during the season by digging out borers and placing soil around the wound to encourage rooting. To limit future populations, remove plant debris at the end of the season and till in the soil to bury cocoons. 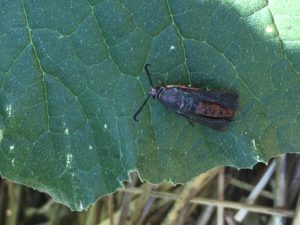 The squash vine borer moth lays its eggs near the base of the plant. When they hatch a borer digs into the plant stem, causing wilting. 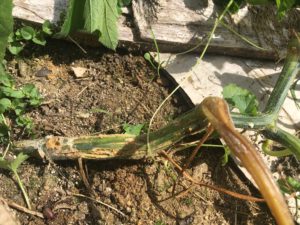 Cucurbits rely on pollination by insects to produce viable fruit. Therefore, it is important to try non-chemical tactics to reduce pests, use insecticides only when needed, and apply in the evening to avoid bee acitivity periods as much as possible when insecticide is needed. Be sure to read and follow label instructions closely.

I hope this background information will help you identify these pests and better anticipate their presence in your garden. If you have any questions about these or other pests of cucurbits, contact the Caldwell Extension Center at 828-757-1290.