— Written By Seth Nagy and last updated by Tina Lovejoy

The weather should be cooling off soon and working outside will be more enjoyable. It can be tempting to start pruning bushes in the landscape, but it’s better to wait until winter once the shrubs and trees are dormant. This week I was asked about planting grass, as well as two other questions I thought would be of interest.

Question: My crape myrtle has not bloomed the last few summers. Why is it not blooming?

Answer: The flowers of Crape myrtles are produced on the current season’s growth, so if you have limited growth, there will be limited flowers. Drastic pruning or pruning after new spring growth will delay summer flowering.

Landscapes grow and mature. Sometimes where a plant once received enough sun to bloom, it now does not. The large trees in the landscape grow bigger, and thus, each year provide more shade.

Insects can also stop plants from blooming. Heavy infestations of aphids or the crape myrtle bark scale take energy away from the plant and this decreases flowering. Excessive fertilization, especially high amounts of nitrogen, in combination with severe pruning, can eliminate or delay flowering, too.

If lichens are growing on bark, it is an indication the tree is growing slowly and is not healthy. This could be from poorly-drained soil, shade, or low nutrient levels in the soil. Determine the reason and correct the problem(s). If the current site is not good for the crape myrtle, move it to a better location. This fall, after frost, is the best time to move shrubs and trees in the landscape.

Question: What is this caterpillar? 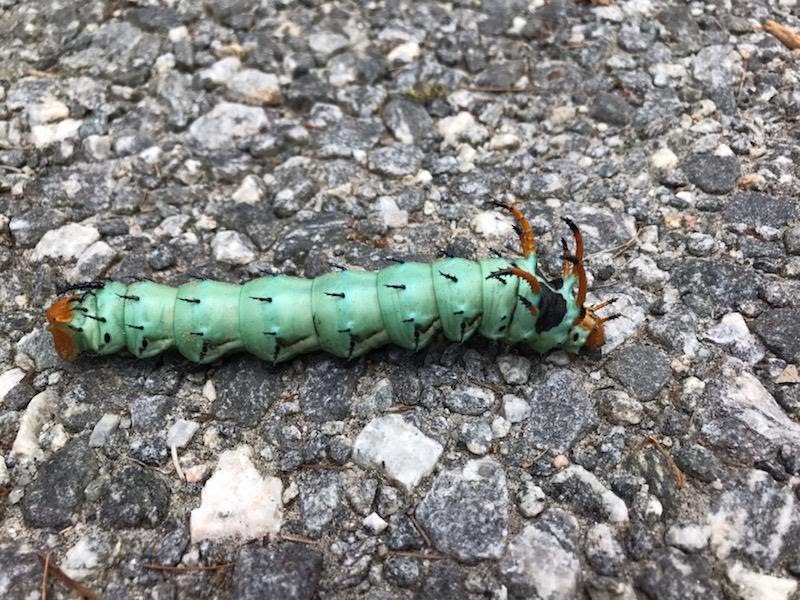 Hickory horned devil found and photographed by Travis Livingston. This is the largest caterpillar found in North Carolina.

Answer: This caterpillar is the larval stage of the a regal moth. These are the largest caterpillars native to North Carolina. The caterpillars are commonly called the hickory horned devil. The scientific name for this insect is Citheronia regalis. Fully-grown, the caterpillar is about 4.5 inches in length. It has a brown head, dark green body, black prolegs, and numerous spines. The two body segments toward the front have four long projections each that are brown at the base, black at the tip, and which curve back. These are the “horns” that give the caterpillar its ferocious appearance and name. The “horns” are sometimes 3/4 inch long. These are not stinging caterpillars; this is all just for show.

These caterpillars are typically seen on tree species of the Juglandaceae family, including black walnut, butternut, and, of course, hickories and pecans. They have also been found on persimmon, sweetgum, and sumac trees.

Regal moths emerge from the soil during the summer and mate. Female moths deposit eggs on leaves in small irregular clusters. The eggs hatch in about 16 days. The caterpillars develop through four larval stages. In the last stage, the caterpillars have tremendous appetites. When disturbed, the caterpillars throw the front part of their bodies from side to side in an aggressive  display. In late summer and early fall, the larvae burrow into the soil to pupate and overwinter. Most remain as pupae for 11 months, but some take 23 months before emerging as adult moths. Unfortunately, the hickory horned devils do not seem to be as prevalent as they once were. 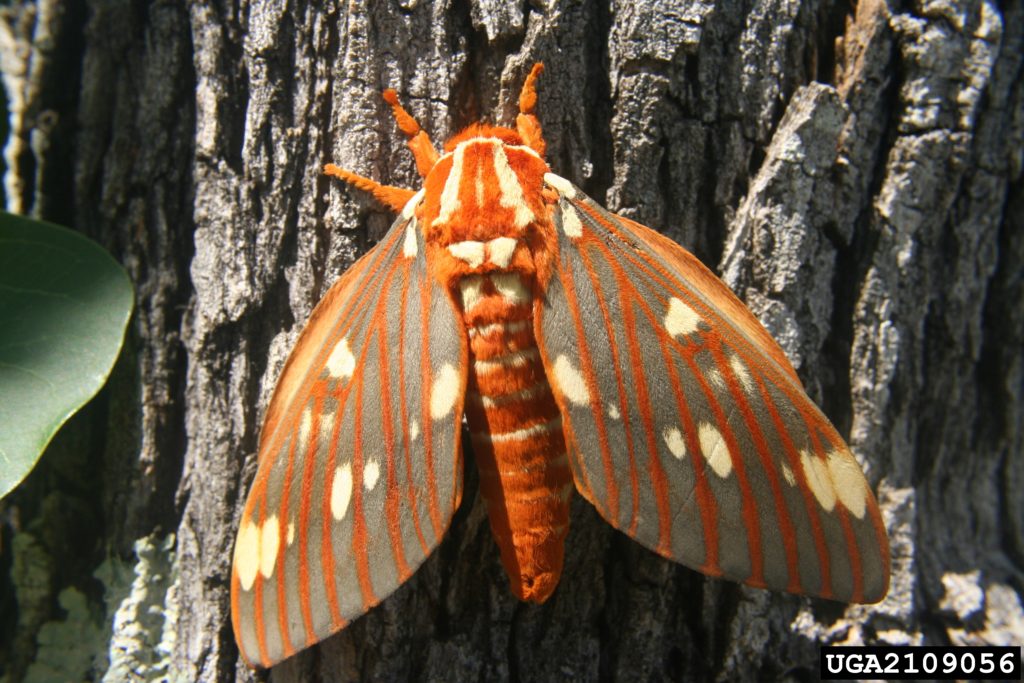 Question: When should I seed my lawn?

Answer:  The best time to sow tall fescue is the middle of September. Make sure to use a quality seed, cover with straw (for new lawns), and water frequently to ensure germination. When the seedlings emerge, they have very small, shallow roots. Keep them watered, and don’t let falling leaves smother them. Use a leaf blower on “low power” or rake VERY gently to remove leaves.

Mow the grass once it’s up 4 inches tall to keep it from smothering out the smaller seedlings. If not fertilized at planting, fertilize two or three weeks after emergence.

If you have agricultural questions, contact the Caldwell Extension Center at 828-757-1290, or email me at seth_nagy@ncsu.edu.