Find this article at:
go.ncsu.edu/readext?639681
— Written By Seth Nagy and last updated by Tina Lovejoy

The poinsettia has a long history of cultivation with the Aztecs in Mexico. In the 17th century, Franciscan priests began using the flower in the Fiesta of Santa Pesebre nativity procession. Since the plant flowered naturally during the Christmas season, it became linked with the holiday.

The poinsettia was introduced to the United States in 1825 by Joel Poinsett, the first U.S. ambassador to Mexico. The name poinsettia is derived from his name. The botanical name for the poinsettia is Euphorbia pulcherrima.

Albert Ecke began growing poinsettias as a cut flower after moving to Hollywood in 1906 and starting a cut flower farm. After moving to Encinitas, CA, the Ecke family focused on field grown poinsettia mother plants, which were shipped throughout the country by railroads.

Poinsettia breeding began in the 1950s. There was an effort to develop cultivars that would retain their leaves and bracts for a longer period. Early breeding efforts included those of Mikkelsen of Ohio (Mikkelsen series), the Heggs of Norway (Hegg series), as well as those of the Ecke family (Eckespoint series). The Fischer family, a German breeder, has also contributed many cultivars to the poinsettia tradition. These breeding programs focused on stronger stems, leaf, and bract retention, multiple branching, earlier blooming, and color variation.

Dr. Brian Whipker is a Professor and Commercial Floriculture Extension Specialist at NC State University. He studies greenhouse production. One recent study he conducted was looking at nutrient disorders. He photographed and recorded symptomology and plant nutrient concentrations in more than 50 greenhouse crops, including poinsettias. See images of the 232 poinsettia varieties that have been studied at NC State University.

How to Choose the Right Poinsettia?

Select plants which have brightly colored bracts and dark green foliage covering most of the stem. Avoid plants that have dropped their leaves, are wilted, or have faded, torn, or discolored bracts.

Traditionally, the presence or absence of the true flowers or cyathia (the small, round, yellow parts located in the center of the bracts) has been the measurement of freshness. As the plant ages, the cyathia typically drop. However, many of the newer cultivars have improved cyathia retention or there are few cyathia present, which limits the use of cyathia as an indicator of age.

Since poinsettias are tropical plants, temperatures below 50°F will cause chilling injury. The “selling” establishment should sleeve or cover the plant when the plants could be exposed to temperatures below 50°F. Poinsettia plants should be kept in a warm vehicle, but not placed in the trunk. Chilling injury causes the bracts to have a blue or white discoloration and possibly result in leaf drop. Be careful not to place poinsettias near an outside door where the cold drafts will cause chilling injury.

For many the Christmas season does not start until they bring home their first poinsettia plant. Certainly, a few beautiful poinsettias around the home and office are all the holiday decorations that some people need. Poinsettias can be used in holiday arrangements as an accent or a focal point. 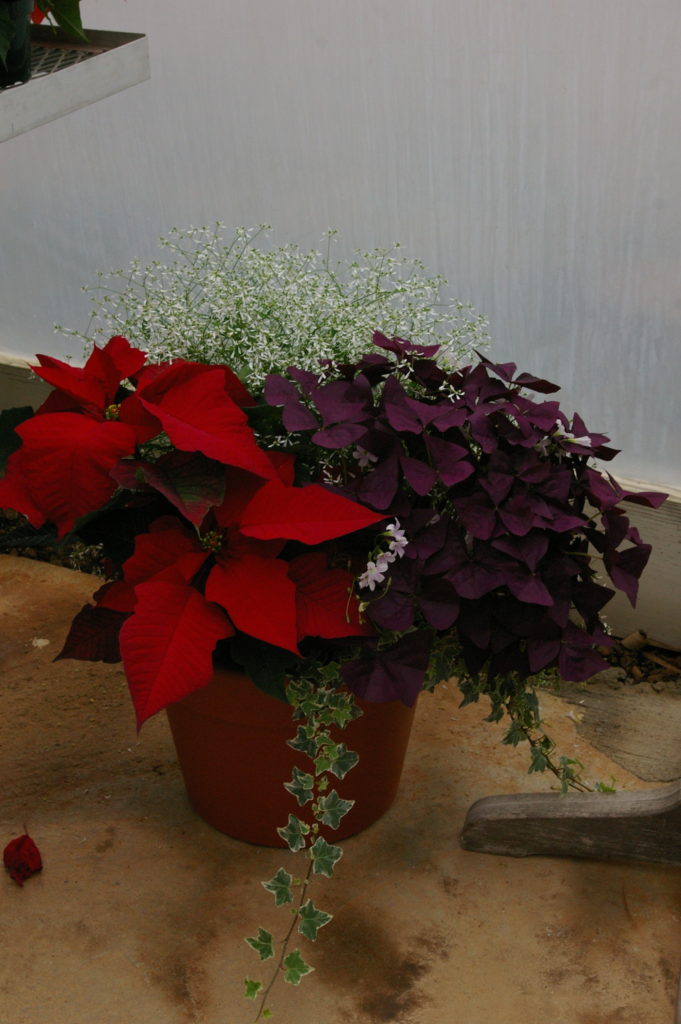 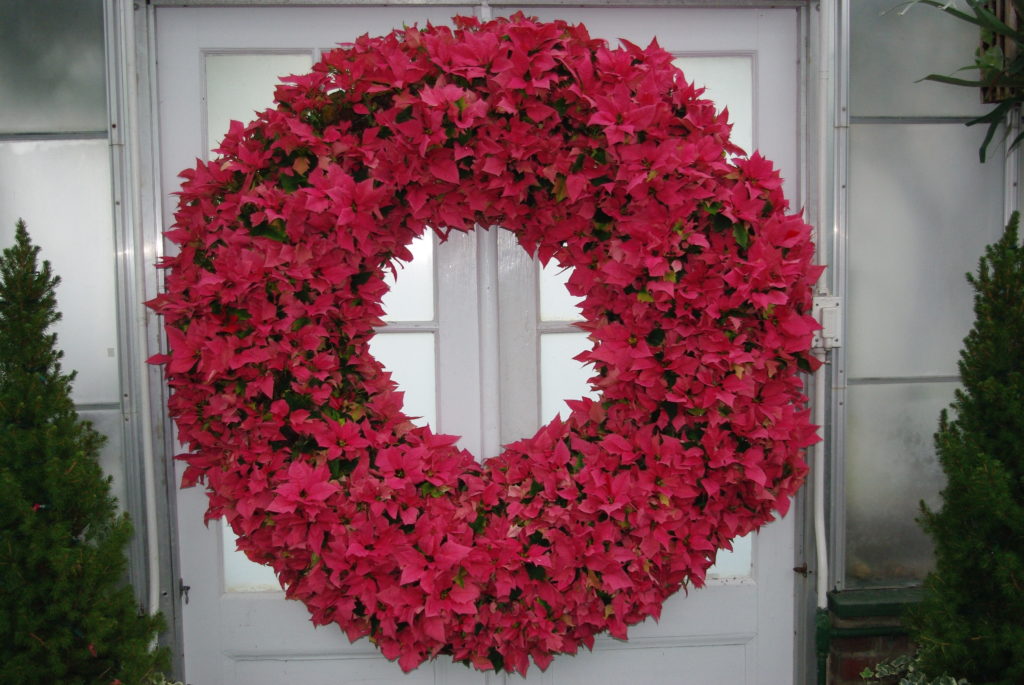 It just takes being creative for how many ways poinsettias can be used to decorate during the holiday season. (Credit NC State University)

No, poinsettias are not poisonous! Certainly, the leaves and bract don’t taste good and eating them might cause a stomachache and in rare cases, vomiting. Some people are sensitive to latex or have a latex allergy. If you get latex on your skin, wash it off and there should not be a problem.

Poinsettias are an easy to care for flowering plant that should easily last for the entire Christmas holiday season if a few simple points are followed.

Place the plants in well lighted location. Poinsettia generally do best at the same temperatures most people keep their homes in the winter from 60 to 68°F. Cold temperatures below 55°F will damage these tropical plants.

Water when needed, which is usually when the surface of the potting soil feels dry, but the plant still feels a bit heavy when picked up. If the plants dry out too much, they will lose their lower leaves. Drying out is probably the main reason plants die early in the home.

In a good location with proper proper watering the plants will last until spring.