Find this article at:
go.ncsu.edu/readext?644650
— Written By Seth Nagy and last updated by Tina Lovejoy

This week I would like to share some questions that were recently asked at the N.C. Cooperative Extension, Caldwell County Center. I hope you find these questions and answers helpful. If you have specific questions not answered here, please contact me and my team at the Caldwell County office.

Question: This will sound crazy but I have a problem with worms. These worms are 2-3 inches and slender. They look sort of like earthworms but aren’t as fat. They end up in my cats water bowl. I thought they fell off the roof of the barn. They swim in the bowl. They are also between my garage door and the floor. Hundreds of them. I don’t know if I need to get rid of them. One of my horses had roundworms recently but they were bigger. The whole worm thing is disturbing since my horse had some. Any ideas? 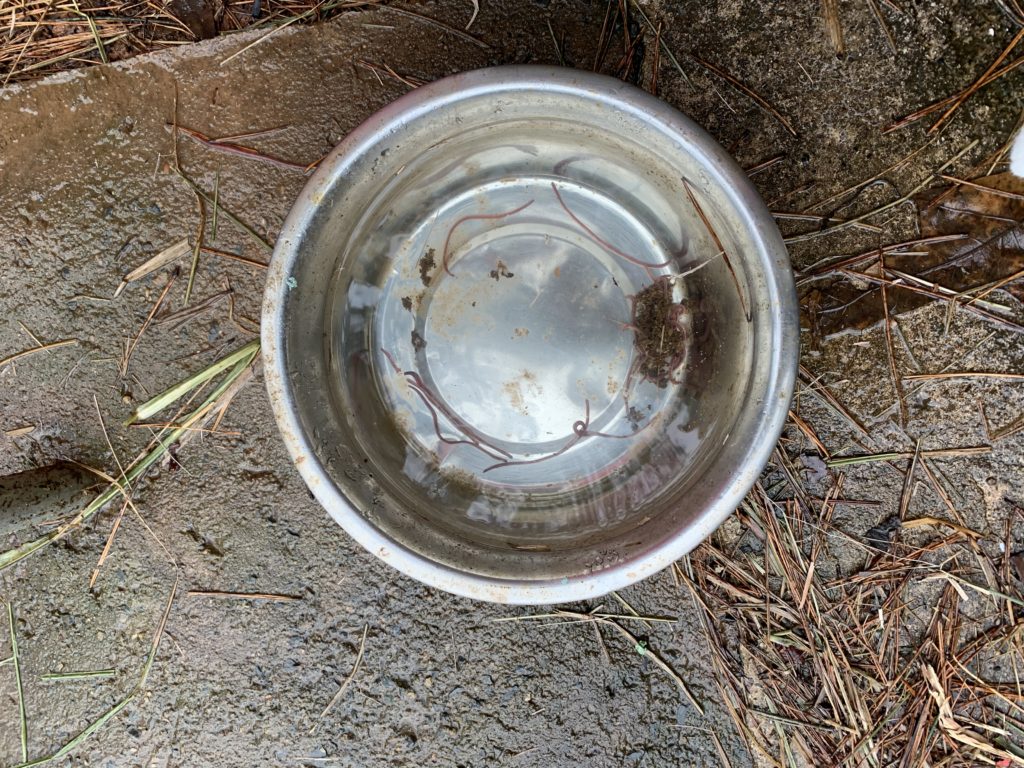 These worms are called horsehair worms. They are actually parasites of crickets. They are not harmful to pets, livestock, or people. (Photo Credit Ann Winkler)

Answer: These are horsehair worms. They are a parasite of crickets and beetles.

Horsehair worms belong to the group Nematomorpha. They are similar to nematodes (microscopic worms) but much longer (4 inches or longer) and very thin (1/80 to 1/10 inch diameter). They are found in water or wet areas, such as alongside streams or puddles but they can occur in cisterns, livestock watering troughs, or other outdoor water containers.

These harmless, curious creatures writhe slowly, contorting their hair-like bodies into intricate knots. Horsehair worms develop as parasites in the bodies of grasshoppers, crickets, cockroaches, and some beetles. When mature, they leave the host to lay eggs. They are not parasites of humans, livestock, or pets. They pose no public health threat.

The name “horsehair worm” refers to the old belief that they came from horse hairs that fell into water and came to life. Cabbagehair worm is another name for these worms because they can be found in the water droplets that collect in cabbage leaves. Since they are usually contorted into “knots”, the name Gordian worm was used by some. According to Greek legend, King Gordius of Phrygia tied a complicated knot. The first person to untie it would be the future ruler of Asia. Alexander the Great was not able to untie the knot so he cut through it with his sword.

Question: I have kept bees all my life. This fall I had 18 strong hives. Now there are no bees in any of my hives. What happened to the bees?

Answer: Unfortunately I have been asked this question too many times. It is the same story. The colony was big and looked healthy in the fall. The bees had plenty of honey. Then the colony just disappeared.

Many people want to use the term colony collapse for this type of death. Collapse is a good descriptor of what happens, but this is not true colony collapse disorder. This is death by varroa mites (Varroa destructor) and their associated viruses.

Varroa mites are an external parasite of honeybees. They affect honeybees by attacking the adult bees and the developing bee larvae. These mites are reddish-brown, flat, oval-shaped, and about the size of the head of a straight pin.

The varroa mite is the most serious pest of honey bee colonies worldwide. This parasite was first detected in North Carolina in 1990, having been introduced to the United States just three years earlier. Virtually all feral (or “wild”) honey bee colonies have all but been wiped out by these mites. In North Carolina managed beehives have dropped by an estimated 44 percent since the invasion of the mites. It is vital beekeepers understand the varroa mite and its management to be a successful beekeeper.

A new tool for beekeepers that is as essential as the smoker, veil, or hive tool is the sugar shake jar. This simple sugar shake jar is used to assess the mite population in a hive. 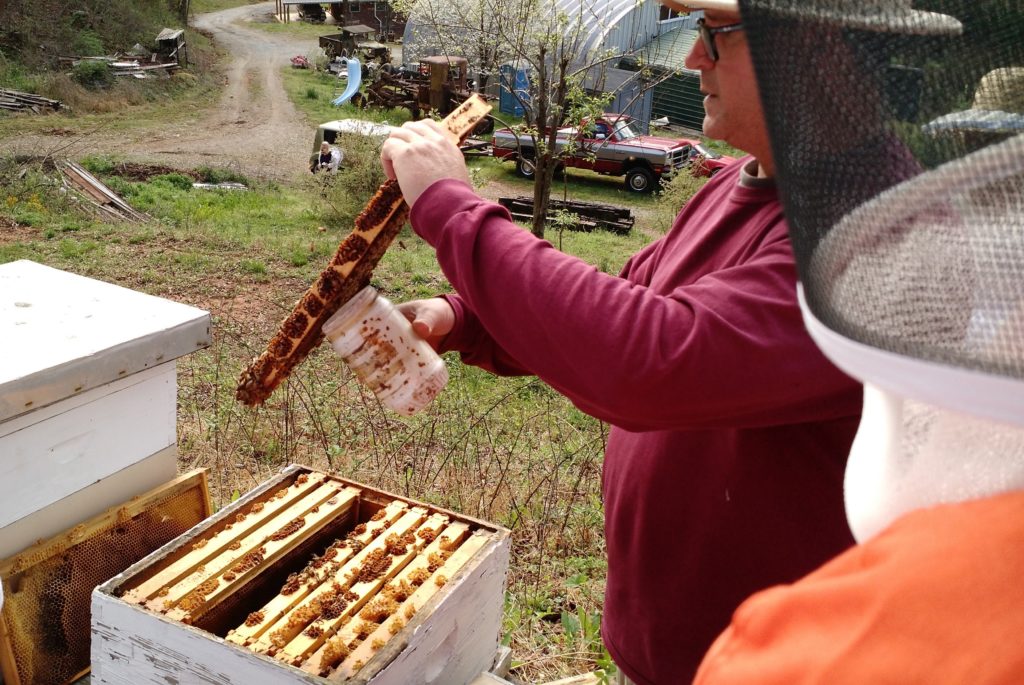 N.C. Department of Agriculture & Consumer Services – Apiary Inspector Bee Inspector – Lewis Cauble demonstrates to members of the Caldwell Co Beekeepers Association how to monitor for varroa mites using a sugar shake method. Lewis is using a peanut butter jar to collect one cup of bees from the brood area of the hive. One cup of bees is about 300 bees. (Photo Credit Seth Nagy)

Question: I heard there is a new requirement to buy paraquat?

Paraquat-dichloride is the active ingredient of a non-selective herbicide. This product is sometimes used by crop farmers to kill weeds prior to planting. This is called a burn down application. Some trade names of products that contain paraquat are Gramoxone, Para-SHOT, Parazone, Quick-Quat, Firestorm or Helmquat.

Paraquat is a restricted use pesticide. Applicators have to have a pesticide license to purchase or use this product. The US Environmental Protection Agency (EPA) restricts the use of pesticides for only two reasons. Either the product is potentially hazardous to the environment if applied incorrectly or it is poisonous to the applicator.

CAUTION – Products with the signal word CAUTION are lower in toxicity. A “CAUTION” label means the pesticide product is slightly toxic if eaten, absorbed through the skin, inhaled, or it causes slight eye or skin irritation.

WARNING – Indicates the pesticide is moderately toxic if eaten, absorbed through the skin, inhaled, or it causes moderate eye or skin irritation.

DANGER – Means that the pesticide product is highly toxic by at least one route of exposure. It may be corrosive, causing irreversible damage to the skin or eyes. Alternatively, it may be highly toxic if eaten, absorbed through the skin, or inhaled. If this is the case, then the word “POISON” must also be included in red letters on the front panel of the product label.

In addition to the signal word “DANGER” there can also be a picture of a skull and crossbones. This is the most poisonous category of pesticides to people.

The pesticide label of paraquat has changed and now requires applicators to have additional training. The requirement applies not only to applicators, but also to anyone who handles the newly labeled paraquat in any way, including mixing, loading, applying, transporting, disposing of or cleaning containers of the herbicide. Noncertified persons working under the supervision of a certified applicator are prohibited from handling paraquat in any way.

If you have agricultural questions, contact the N.C. Cooperative Extension, Caldwell County Center at 828-757-1290, or email me at seth_nagy@ncsu.edu.