What’s Wrong With My Leyland Cypress?

Find this article at:
go.ncsu.edu/readext?744877
— Written By Sarah Christas and last updated by Tina Lovejoy

Fall is here and trees are starting to turn colors and lose their leaves. Your Leyland cypress shouldn’t be, though.

Leyland cypresses are one of the most popular screening trees. They gained popularity because of their fast-growing characteristics and relatively low pest and disease problems. At maturity, these trees can be 60ft-90ft in height and 12ft – 15ft in width.

Why are we seeing problems with them now?

As previously mentioned, Leyland’s grow to be a fairly large tree. Commonly people planted the trees with only a few inches between them. Overtime, the trees grow too closely together and cause competition for resources. Not only is there overcrowding above ground, but below ground for root space too. This stress can lead to increased disease and insect pressure.

How far apart should Leyland Cypresses be planted?

Leyland should be planted at least 10ft-15ft apart to avoid competition and overcrowding. Overcrowding leads to problems with poor air circulation, increasing the possibility of disease occurrence and shading out of lower branches. 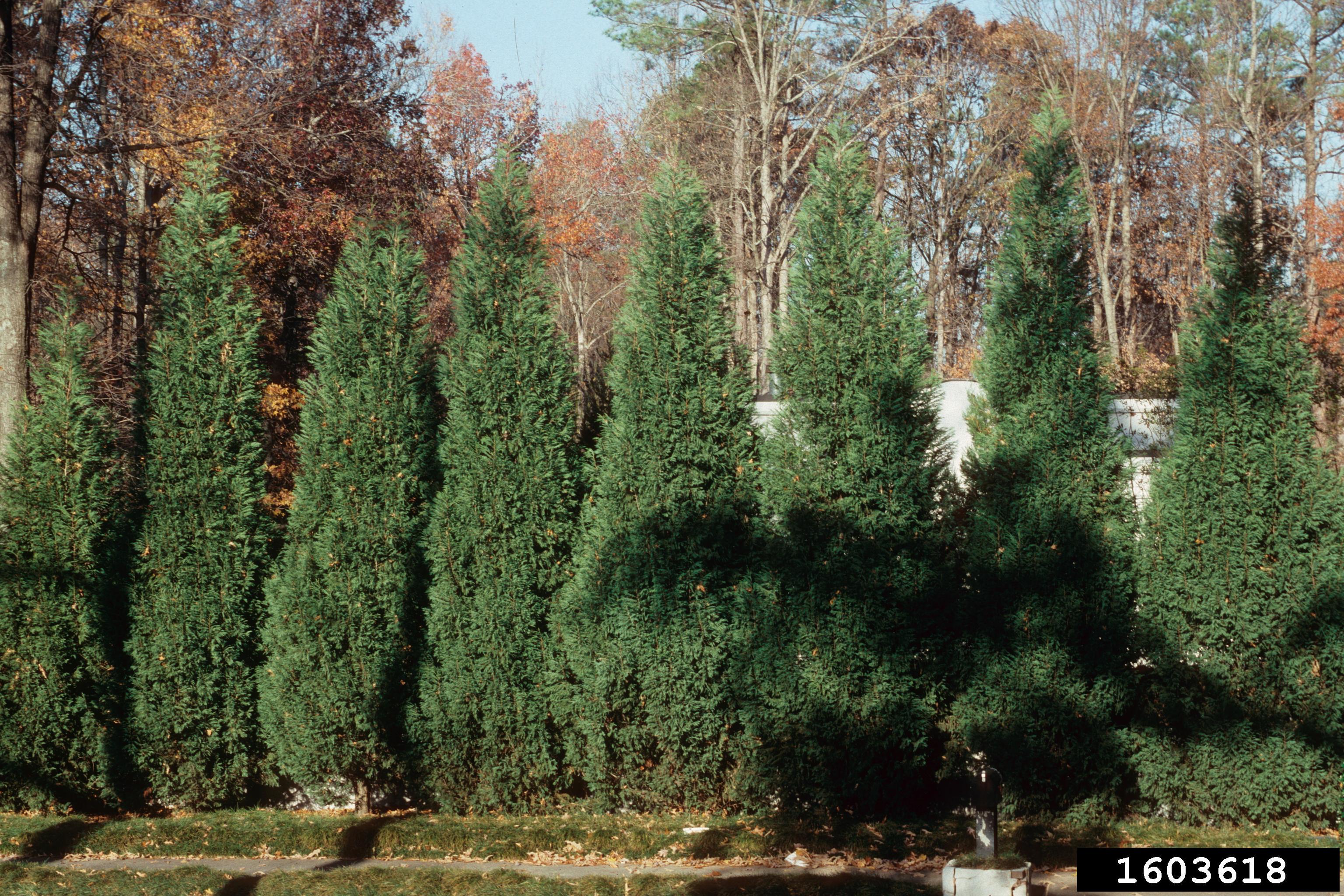 Commonly, people planted the trees with only a few inches between them. Leylands should really be planted 10ft-15ft apart.
photo credit: John Ruter, University of Georgia, Bugwood.org

You should also consider a mix of plants to decreases potential pest and disease problems. Consider the Arizona cypress (Hesperocyparis arizonica) with low water requirements (once established). Another is ‘Green Giant’ arborvitae (Thuja plicata ‘Green Giant’) that requires little to no pruning. The Japanese cedar (Cryptomeria japonica) develops a tall, columnar screen in partly shady areas. To add some color to your screening plants, consider the camellia family. Sasanqua varieties will bloom in the fall and grow to 10ft tall.

What insects could be attacking my Leyland?

Bagworms are a popular pest among Leyland. These are easily identified as cylindrical bags hanging from the branches. Symptoms aren’t usually noticeable until you have a heavy infestation. 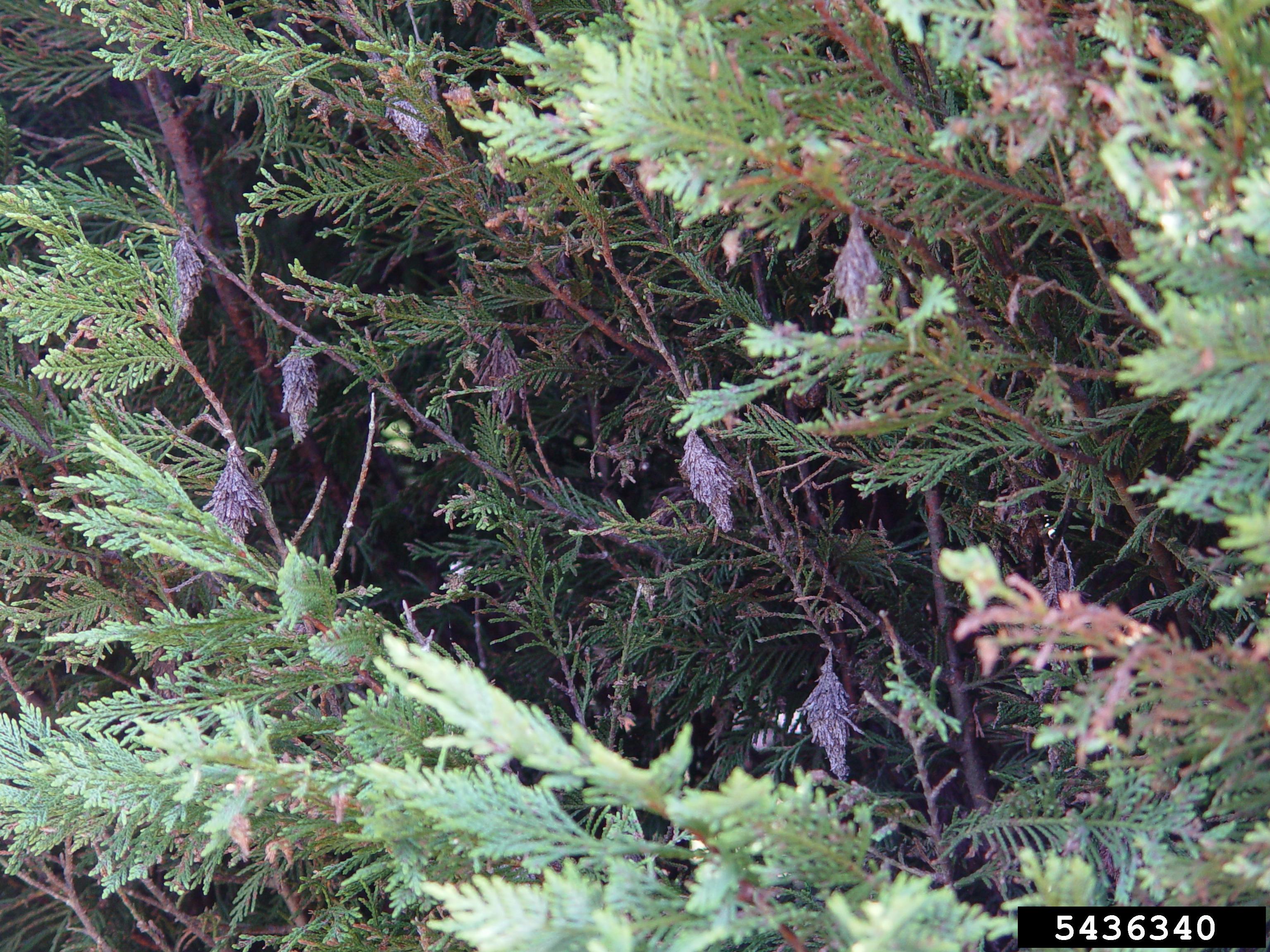 Often mistaken for cones, Bagworms overwinter as eggs within these bags, with the larvae emerging from the bag during May and June, depending on location and temperature.
Photo credit: Chazz Hesselein, Alabama Cooperative Extension System, Bugwood.org

To control bagworms, manually remove them from your branches during the winter and destroy them. Little to nothing can penetrate that bag. Dipel is something you can apply, but timing is crucial. Spray when the worms are small, which is in May. As always, read and follow the pesticide label!

If it isn’t an insect, what could it be?

If your Leyland looks defoliated in places, has branch dieback, or leaking sap from the trunk and branches, then you may have a disease problem. These symptoms describe several canker diseases of the Leyland cypress. Usually caused by the fungal pathogen Seiridium. While there is no chemical control for this, you can try to salvage your tree by pruning out effected areas where possible. Be sure to sanitize your pruners in between cuts so you prevent further spread the disease. 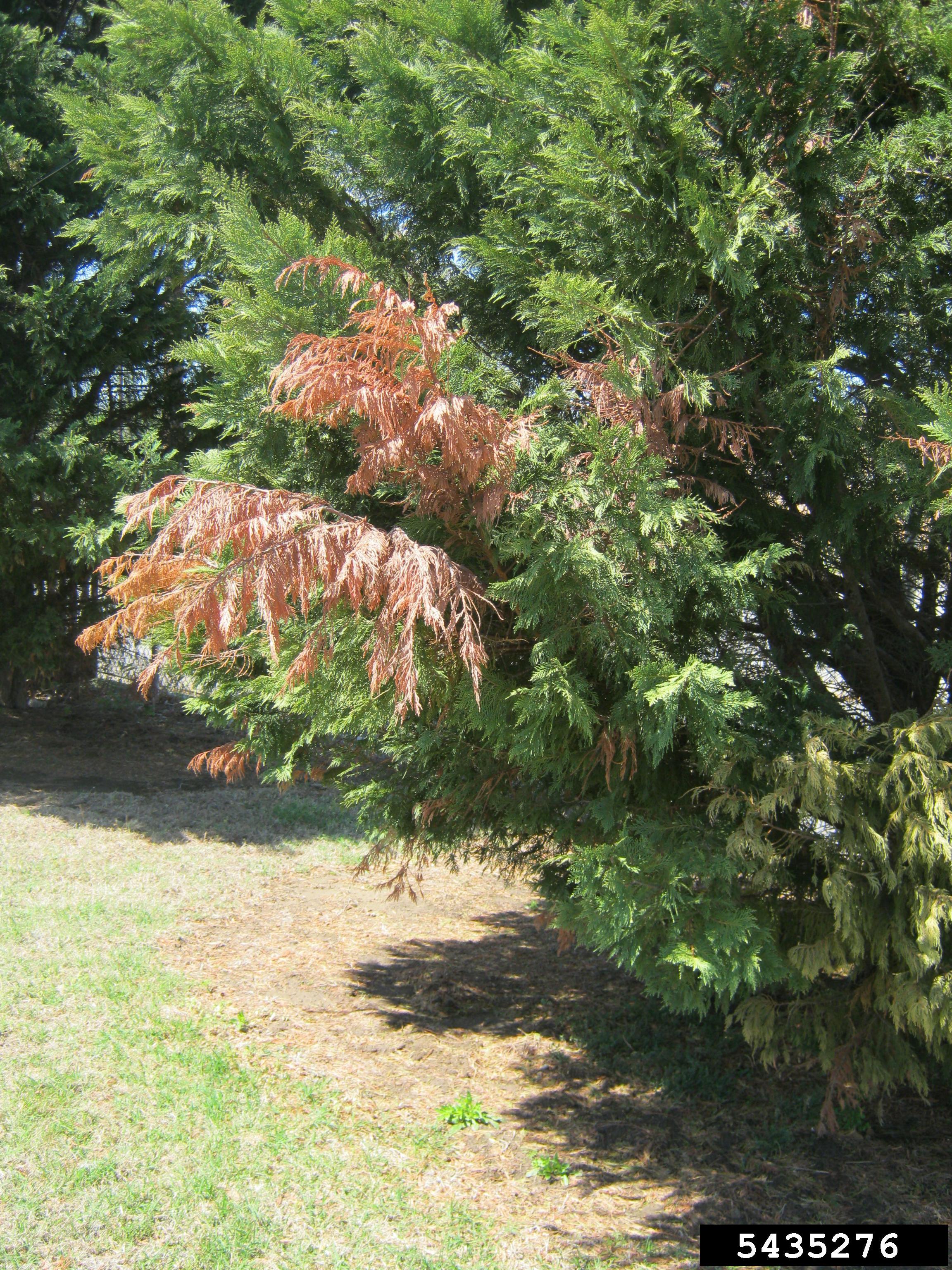 Over time, the disease moves up the tree. Sometimes the disease will be more prevalent on one side of the tree then the other.

To prevent needle blight, adequate air flow is necessary and avoid using overhead irrigation. There are options for treatment. Fungicides with active ingredients such as thiophanate-methyl and myclobutanil are recommended for use against needle blight. However, to be effective, these sprays need to begin in late spring and continue through summer until the cooler, less humid months of fall. Read and follow the pesticide label!

If you have questions regarding Leyland cypresses contact your local extension agency at 828.757.1290