Do I Have Murder Hornets?

Find this article at:
go.ncsu.edu/readext?821837
— Written By Sarah Christas and last updated by Tina Lovejoy

When the Asian giant hornet gained media attention last year, we started getting calls from people who feared that they may have the “murder hornets” media was talking about. After a couple of months, those calls became less frequent. The last couple of weeks we have had multiple phone calls about the “murder hornets” again. This week I would like to take the time to revisit these questions so that homeowners can accurately ID what hornet/wasp they are experiencing.

Q: How do you know Asian giant hornets aren’t found in North Carolina?

A: As of now, they have only been confirmed in the Pacific Northwest. This insect has never been spotted outside of Washington State or southwestern Canada. Previously established colonies and individuals, in those areas, have been eradicated.

Q: I have these huge, aggressive hornets. If they aren’t “murder hornets,” what are they?

A: There are two types of hornets that can be confused with the Asian giant hornet because of their size.

One type is the European hornet. This hornet can get up to 1.5 inches long and can be aggressive. European hornets are brown with wide yellow markings with a reddish-brown head. Their stripes have dot-like accents. They rarely build nests that are free hanging or in unprotected areas. Frequently, the nest is built at the cavity opening, rather than deep within. The outside of the exposed nest will be covered with coarse, thick, tan, paper-like material. 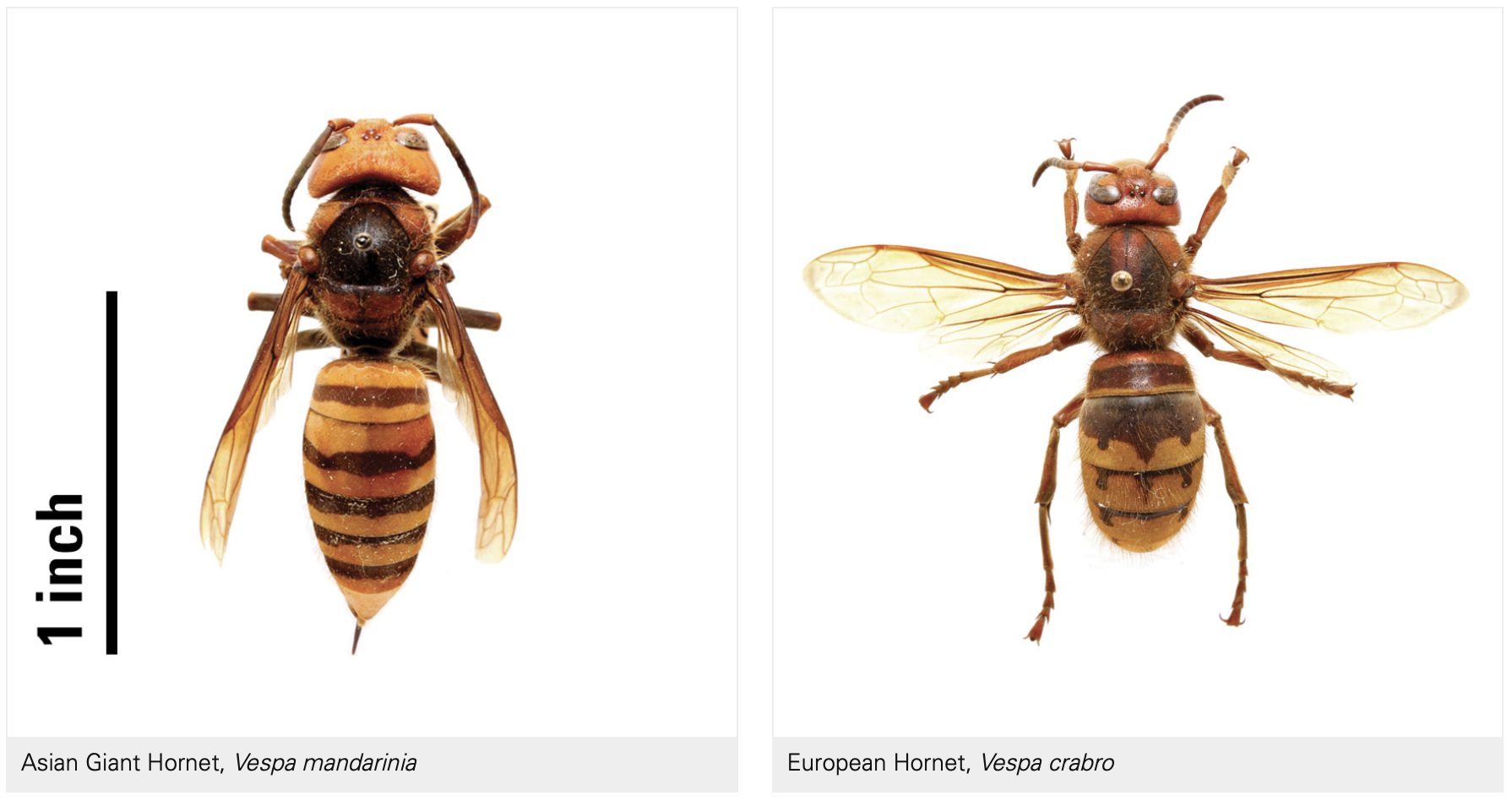 The other hornet you could be confusing Asian giant hornets with is the cicada killer, which is actually a wasp (technically, all hornets are wasps, but we won’t get into all that). You can ID these by its black abdomen with three complex, yellow bands. The head and thorax are rust colored to dark brown, and the wings a transparent russet. They can reach up to 1.5 inches long, as well. Unlike the European hornet, the cicada killer wasps are non-aggressive towards humans. 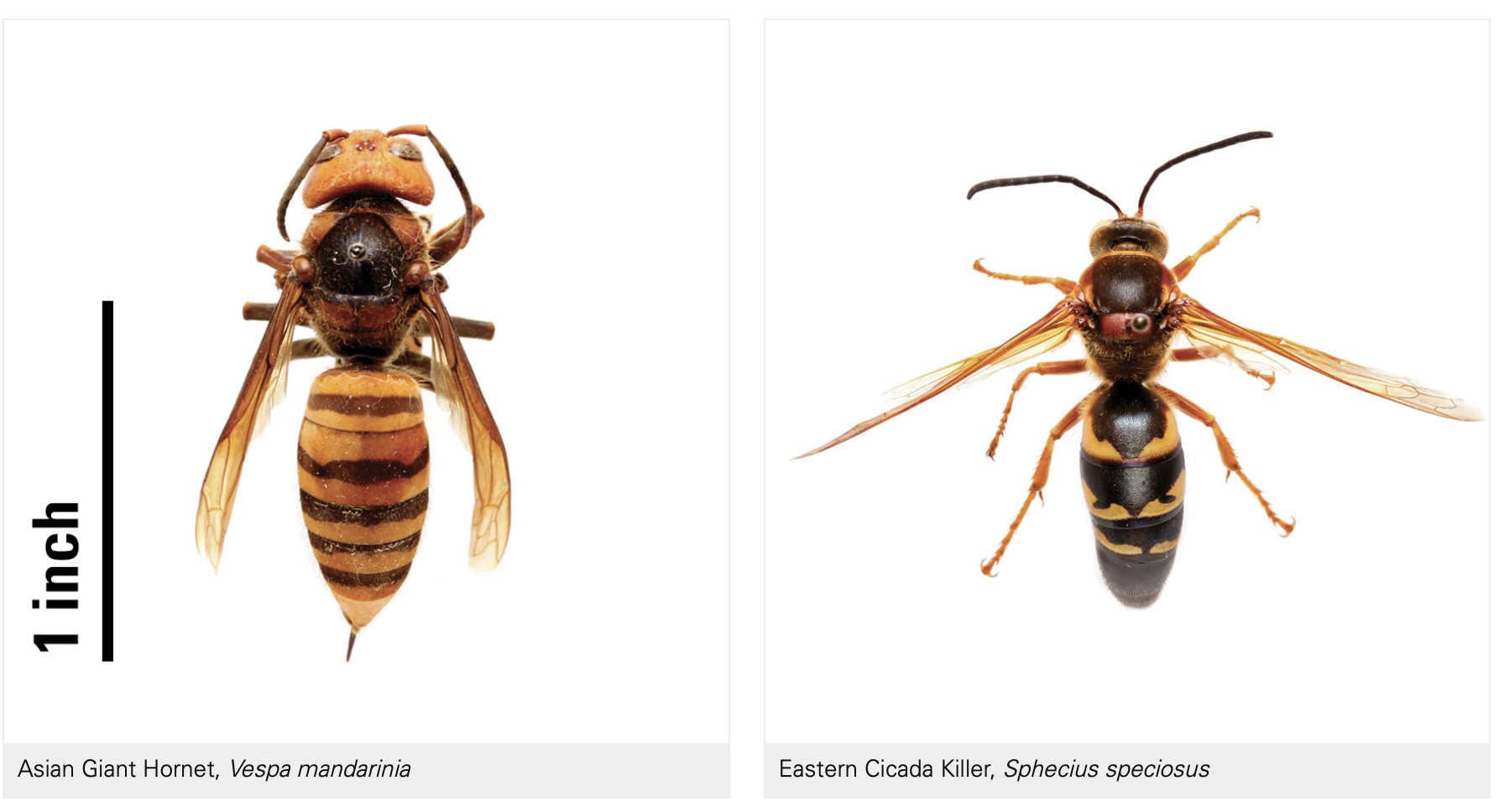 Asian_vs_Cicada.png- Cicada killers (featured on the right) can be identified by their black abdomen with three complex, yellow bands. The head and thorax are rust colored to dark brown.

Q: I found these huge hornets around my hummingbird feeder; how do I get rid of them?

A: Most likely these “huge hornets” are either the European hornet or cicada killer wasp. Like hummingbirds, bees, hornets, wasps, etc. will be attracted to sugar water. To combat this, you can do a couple of things. One option you can try is a bee guard that attaches to your feeder. The other option is using Vicks vapor rub (or something similar) and putting it where you see the hornets land on your feeder.

Q: How do I control the European hornet and the cicada killer wasp?

A: Control of these two can vary.

European hornets will not survive the winter, so if they aren’t invading your house, control may not be necessary. If these hornets are an issue, control is best achieved by applying a pesticide directly into the nest at dusk. Use any aerosol “Wasp & Hornet” spray that propels the insecticide about 10-15 feet.

Cicada killer control is rarely necessary. Males are unable to sting, and females are unlikely to do so.

The best way to be sure you aren’t dealing with Asian giant hornets is by correctly identifying what you are seeing. Asian giant hornets have large, yellow heads with small eyes. Their stripes are even without the dot-like accents. If you are still unsure, call the N.C. Cooperative Extension, Caldwell County Center at 828-757-1290 for help with a positive ID. NC State Extension also has excellent publications related to this topic. Find those on our website.